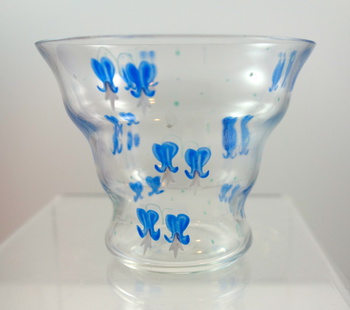 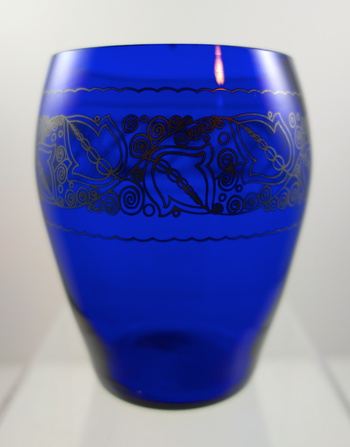 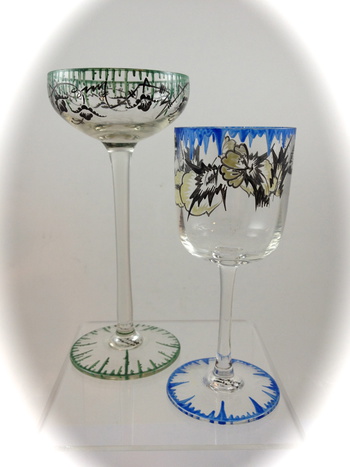 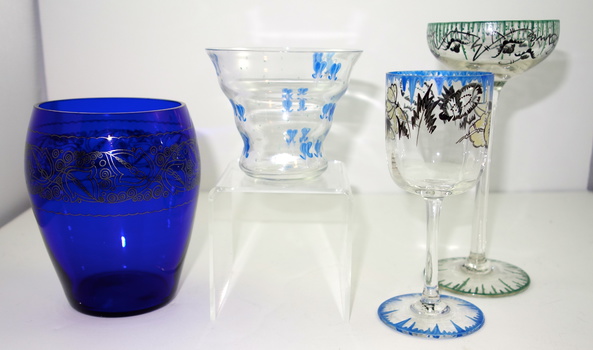 This article is an expansion of the previous writeup on the glass designs of Emmy Seyfried. Since that time, I have found examples of vases by the other two women mentioned in the chapter written by Katrin Schöne-Chotjewitz in Das Böhmische Glas 1700-1950, Band VI about female freelance artists who started their own workshops decorating glass obtained from the Bavarian Forest. This information is taken from a loose translation of the original German-language article.

Freelance artists in their own workshops: Ida Paulin, Bernhardine Bayerl, and Emmy Seyfried.

In the 1920s, in the Munich area there were three workshops operated by female glass artists: the workshops of Emmy Seyfried and Bernhardine Bayerl, each in Munich, and Ida Paulin in Augsburg. All three artists were concerned primarily with painted glass. They used self-designed glass shapes that were executed in glass houses in the Bavarian Forest for their decorative designs.

Ida Paulin (1880-1955) came just before the turn of the century to Munich, where she took classes in painting with various artists, including Angelo Jank and Ludwig Dill. Since she could not live by the sale of her paintings alone, she increasingly devoted herself to crafts. She was able to achieve good results with painted glass, and so she built after the First World War her own workshop in Augsburg, which existed until 1944.

Ida Paulin glass forms were characterized by very modern lines. Her painted glass designs are characterized by vivid colors. They usually combine three to four colors. decorated all around the vessel wall. Motifs are found both geometrically ornamental as well as simplified plant and animal representational patterns. In addition to plants and animals, she began using figurative decoration in the foreground in the 1930s . Plates, jugs and cups are painted in a narrative manner with many small scenes. These works show traces of decorations of the Wiener Werkstätte .

Bernhardine Bayerl (b. 1889) studied between 1915
and 1918 at the Munich School of Applied Arts, where she was taught by, among others, the professors Maximilian Dasio and Adelbert Niemeyer. In order to work with glass and to practice designing, she attended until 1920, the craft class of Zwiesel Glass School in Munich and then opened his own business, which by 1922 already had eight employees. Due to economic difficulties, she had to give up her workshop in the late 1920s. She soon found employment as a designer for Marienhütte in Berlin-Köpenick, and later for Josephinenhütte in Schreiberhau .

The Bayerl glass works was influenced strongly by the style of college at Zwiesel, in both form and in decor. The dominant motif is the stylized
flowers with leaves . Glass colored in cobalt blue or ruby is decorated with gold painting, partly in conjunction with enamel colors . On colorless glass decorations, subltle colors were applied. Besides painting, Bayerl also decorated glass with simple , economical engraved decors. Compared with Paulin's work, their glasses are characterized by a greater reluctance of the style as in the color. The technically perfect execution plays an important role in their painting decorations.

Emmy Seyfried (1888-1969) was educated at the School of Applied Arts in Munich, beginning around 1906. She then spent some time as an assistant to professor Adalbert Niemeyer. In 1918 she founded in Munich her own workshop for porcelain and glass painting, which she kept until 1961. In addition to painting, she employed trained engravers to execute engraved designs. Seyfried's designs on glass do not utilize overly extravagant shapes or elaborate designs. She decorated her glass mostly with stylized floral motifs in two or three colors. Their designs are usually applied with spontaneous characteristic style, creating a dynamic effect.

The glass pieces shown above are, from L to R: Ida Paulin (signed with her monogram "IP"), Berhnardine Bayerl (unsigned), and Emmy Seyfried (signed "Seyfried München") - lastly, a group shot of pieces from all three workshops.