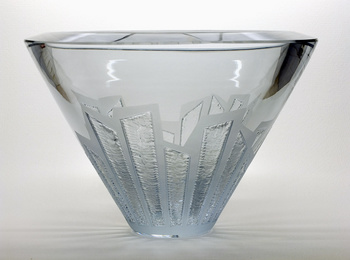 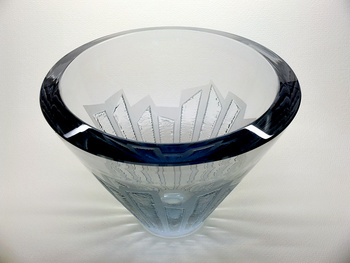 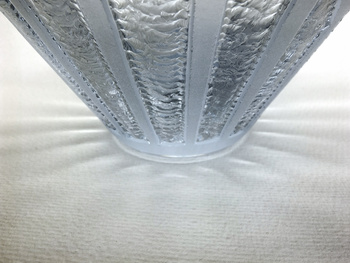 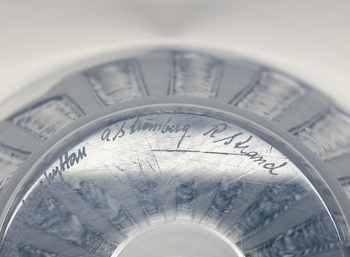 I think this bowl from Strömbergshyttan is a unique piece or at least produced in very small series. I bought it private, but it seems like it appears in this auction after Asta Strömberg, where many unique glass pieces was sold (you can see the bowl to the right in the first picture):

It's signed "Strömbergshyttan A. Strömberg R. Strand". No model number which indicates that it is not produced in series. I have similar signing on another unique/small series bowl by Asta Strömberg. The model does not appear in my catalogues, but I have no catalogoes from the mid 1960s. So it can possibly be a model produced in series, but in that case without the carved pattern. Making the cut/carved pattern is not only difficult but also a large and time-consuming work. A fact which also point to that this particular bowl, with Rune Strands pattern, probably at least is made in a very small series. Manufactured in mid 1960s. My brother worked as an engraver at Strömbergshyttan 1970-77, and worked a lot with this cutting/carving technique. He says that he often had bloody elbows and had to go with patch on his arms afterwards.

The bowl is thick and heavy. The weight is 5,2 kg! Width 260 mm, height 180 mm. A stylish and clean design, typical for Asta Strömberg. And a very suitable pattern by Rune Strand (on the outside of the bowl) with frosted contours. An absolutely first-class bowl, both in design and manufacturing quality as I see. The special cutting/carving technique is an invention by Rune Strand under his time at Strömbergshyttan 1963-68, and I have not seen it on other glass pieces than from Strömbergshyttan. I think they were alone to produce glass with patterns in this technique.