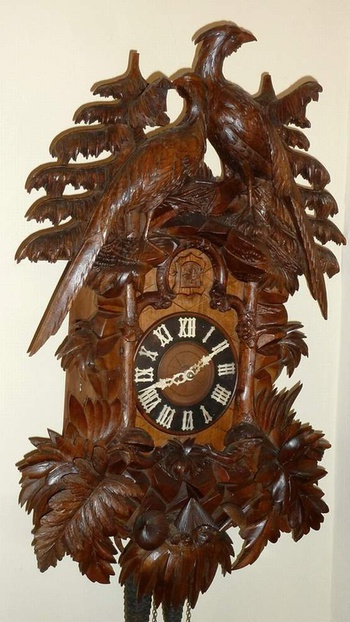 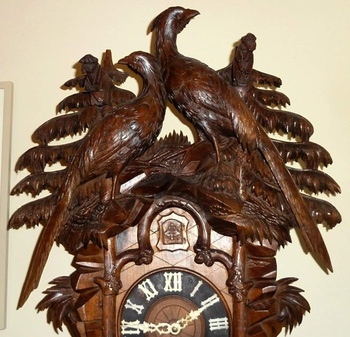 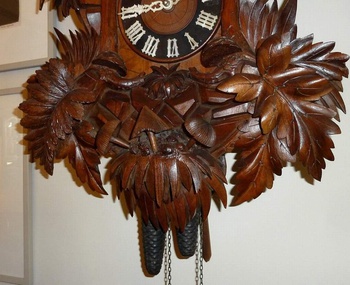 This Black Forest cuckoo clock (ca. 1880) is second to the last of my 'lucky purchases'. It was advertised on Craigslist in January of 2011 for $50.00, and I thought it was a joke but quickly responded anyway. If I was beat to the punch, I at least wanted to tell the seller that he was offering this clock at a ridiculously low price! 18 nerve wracking hours later, the seller, who happened to have a very strong Asian accent, finally contacted me via telephone and said someone was coming to his home (60 miles away from me in San Jose) to view it. Yes, I did something I probably shouldn't have done, but I told him he was giving the clock away at $50.00. It was apparent that he didn't know any better re: the value. With that said, he cancelled his previous appointment in time, and I raced down the freeway and paid his wife $225. The clock obviously had been in someone's attic for a long, long time. Most of the numerals were missing as well as the hands, and minor stuff like the pendulum rod and bellows. Orig. carved pendulum bob was there, too. The last picture gives an indication of how filthy it was. I had cleaned off some of the dust to see what was underneath. Roy at Bonehands carved a new set of bone numerals and a beautiful set of hands. I still want my clock guy to install the tiny nail heads in the numerals. I watched him do it with precision with another (bone hands) cuckoo clock in his shop. With the exception of a very small 1 inch piece of horizontalperpendicular 'fir tree branch' at the very top left side and a piece of mushroom cap, the walnut case is in perfect condition. If I ever wanted to have the two little missing pieces restored, it can be done here in the Bay Area. The overall height and width is 32" x 20"; pheasants are 18" from head to tail. One of my favorite things that this carver did was carve a very authentic animal 'burrow' into the base of each fir tree. The 30 hour movement has not been cleaned yet, yet the clock keeps phenomenal time for a cuckoo clock and it has a nice strong cuckoo call on the hour and 1/2 hour.