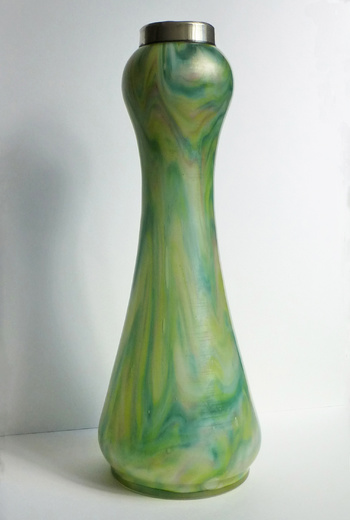 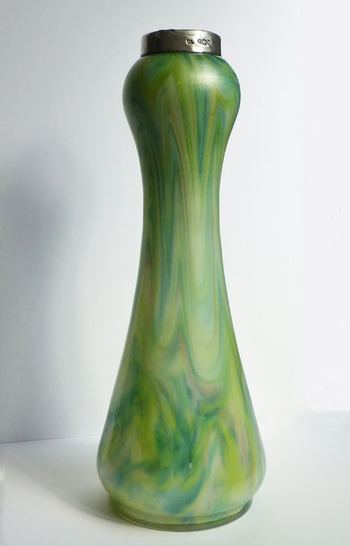 I just received a Rindskopf vase in a decor I have wanted for a long time. I am very pleased with it - it is much more vibrant and colorful than the seller's washed out pictures! It is 7.25" tall, and is fitted with a silver collar hallmarked with the maker's initials DL (for David Loebl), q (for 1911), a lion passant (for sterling) and a leopard's head (for London).

Alfredo just happened to post a vase of his with David Loebl's mark a day ago, so it was perfect timing to find the 'DL' mark on my vase, too! I did some further research on David Loebl (actually Löbl per vetraio50's helpful comment, below), and it turns out that he was German, and worked for a German (actually an area that is now part of Bohemia) firm called Schindler and Company, founded by a long line of glass makers. He ran the London office of the company, and apparently took over that end of the business. It seems he was an exporter who brought glass, mostly Rindskopf and Kralik, into England and then had them fitted with silver collars. If the vases had silver hallmarked collars, they could be sold in higher end jewelry stores, rather than in in regular home goods stores. Interesting to note, Alfredo previously posted a pair of Rindskopf vases in the same decor with silver collars by David Loebl - also dated 1911. http://www.collectorsweekly.com/stories/71277-rindskopf-dl-london-1911-pair
Long lost cousins? ;) 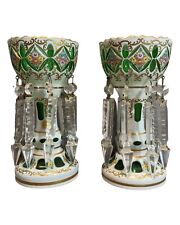 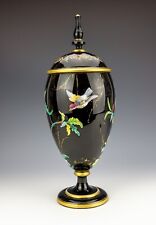