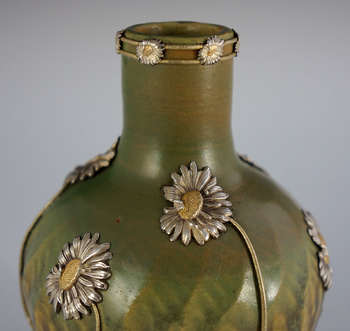 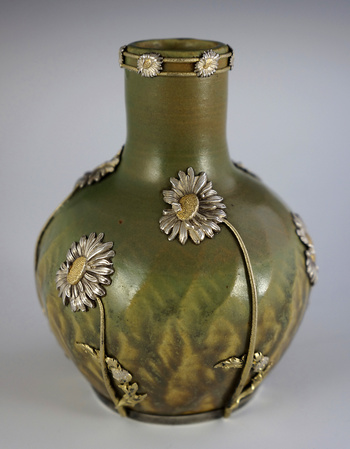 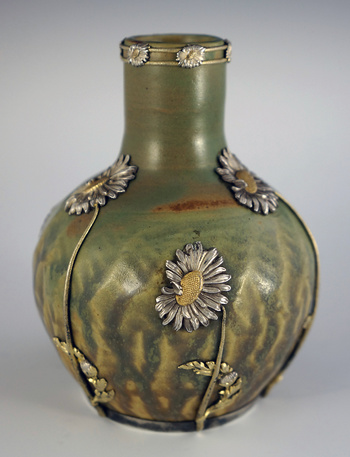 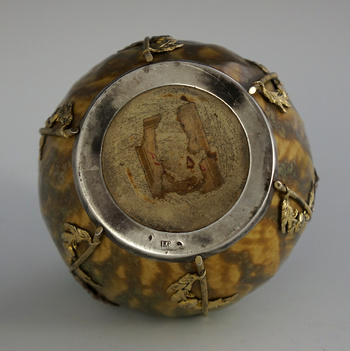 Lucien Gaillard cabinet vase with finely worked silver and gold overlay of daisies with a silver ring base. Circa 1900. The Theo Perrot ceramic upon which Gaillard works his magic features feathered rouletting half way up the body of the vase, which has allowed the matte glaze to trail in a manner so as to approximate leaves of grass. This is a tour de force of precious metal work by Gaillard's studio craftsmen. If one looks closely at the details, you can see that the stems of the overlay are actually textured to approximate the natural characteristics of daisy stems, while the flower heads are positioned and the pedals are crafted to give the impression of being affected by a slight Summer breeze. The underside of the overlay is properly stamped with Gaillard's "LG," as well as smaller French silver assay marks. Dimensions: 4.20”(H) x 3”(W).

In 1892, Ernest Gaillard handed over the business at 101, rue de Temple in Paris to his son, Lucien. Since 1878, Lucien had been eagerly waiting in the wings. “A tireless worker who was captivated by his work,” says Vever, “Gaillard enthusiastically studied all its technical aspects, including alloys, gilding, and patinas, and achieved fascinating results.” Father and son were awarded a silver medal at the 1878 World's Fair for their objects created in this genre. At the 1889 Parisian International Exhibition, he was awarded a gold medal for his engraved objects. At the Exhibition in 1900, he displayed an impressive array of silver vases, remarkable for their subtle, alluring patinas. Though he left without winning a prize, Gaillard came away with a new source of inspiration: the jewellery of René Lalique. Thereafter, Gaillard began creating Art Nouveau jewels of his own. His pieces were impressive and won him acclaim at various Parisian Salons from 1902 to 1904. The designs had a distinctly Japanese feel, featuring stylized insects, flowers, and trees. This is not surprising, as he employed Japanese craftsmen in his Parisian workshop. The pieces they created with Gaillard and his Parisian staff typically featured organic materials like horn and ivory. If gold or silver were used, the metal was given a soft patina and, typically, embellished with enamels, engraving, or both.

A few examples of Gaillard's metal work can be found today at the Museum D'Orsay in Paris and at the Rijksmuseum in Amsterdam.