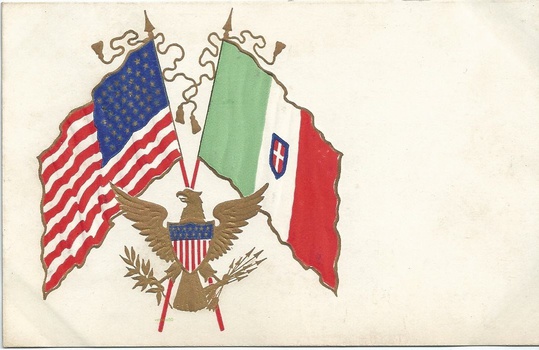 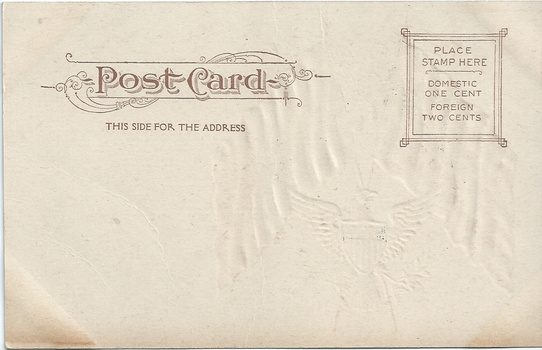 I need some help with this postcard. It comes from a collection of over 340 cards that I recently bought here in Sydney. They were all unused except for one card that had been mailed to Septimus Miller of Caulfield, Melbourne in 1906.

With that information I was able to find out that Septimus and his wife Clara Johnstone Bell left on a world tour in 1906 after his retirement from the Victorian Racing Club. He was a "racing identity". On the world trip he visited racing clubs around the globe and his journey is well documented in the newspapers of his time.

He was in New York in September, 1906 and visited the Coney Island Jockey Club. This is the first of the cards that I will post from their trip.

What I have noted so far is that the card has the 45 star flag – used as the national flag from January 4, 1896 when Utah joined the Union until Oklahoma became the 46th state on November 16, 1907.

The Italian Flag is the Bandiera Nazionale del Regno d'Italia e dell'Impero Italiano. (National flag of the Kingdom of Italy and the Italian Empire). This Italian tricolour, with the armorial bearings of the former Royal House of Savoy was the first national flag from 1861 and lasted in that form for 85 years until the birth of the Italian Republic in 1946.

I suppose the question is WHY?

What happened in 1906 that linked Italy and the USA of note?

The earthquake in San Francisco of April 18 was preceded 11 days earlier by an eruption of Mount Vesuvius on April 7 that virtually devastated the city of Naples, Italy. Could that be it?

Why the use of the Coat of Arms of the United States of America?

I note that there are only nine arrows? A mistake?