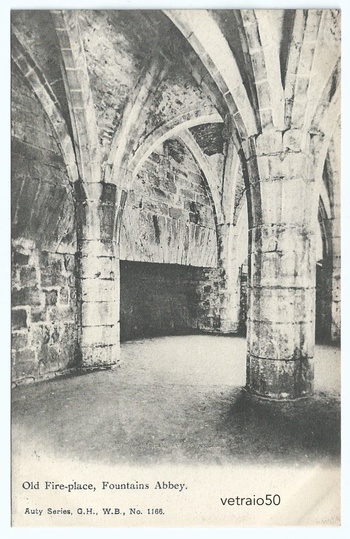 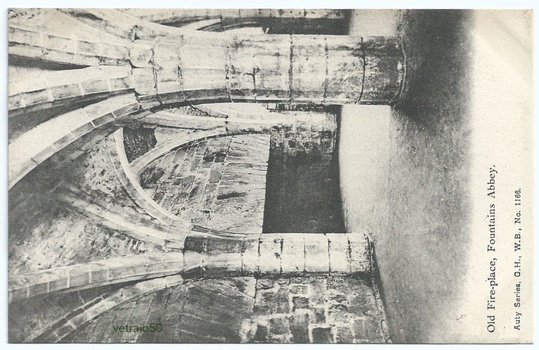 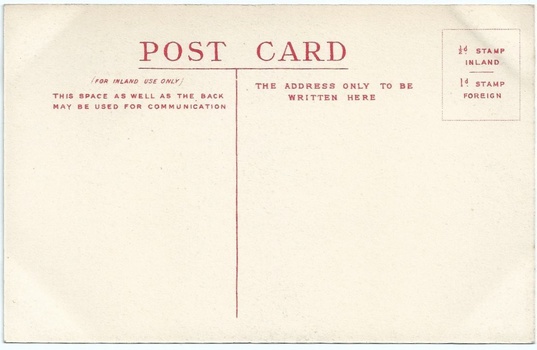 A few of the cards that I have researched so far from the Miller PC collection of 1906 have provided some questions. This card of "the Old Fire-place" was one of them.

The image shows the vaulted ceilings that you see in the Cellarium but I was puzzled as to where the photo was taken. I could not find any such structure in the photos of the Cellarium online.

Then it occurred to me that it might not be within the Cellarium at all.

The Calefactory (also pisalis or warming house) was an important room or building in a mediaeval monastery in Western Europe. It was here that a communal fire was kept so that the monks could warm themselves after long hours of study in the (unheated) cloister or other work. In the early Middle Ages this was one of the few heated rooms in the monastery - the others being the infirmary, the guest house and the kitchen - but this policy was generally relaxed, save for a few very strict orders, by the latter part of the mediaeval period when fireplaces became common throughout the claustral buildings. (http://en.wikipedia.org/wiki/Calefactory)

The other mystery concerned the publisher of the card. On the net I found other cards from the Auty Series but there was little information about the publisher: GH WB. I saw mention of G Hastings, Auty series, "Hastings' Auty Series, Newcastle-on-Tyne, Eng., G. Hastings Auty Fine Art Photographers around 1904 etc..
After some deep digging I found reference on a Dutch PC site that cleared up the situation.

Who was GH WB?

It seems GH = Godfrey Hastings (not George Hastings).
The W.B. is the name of the town where he worked: Whitley Bay.

"Hastings took over the business of Matthew Auty after Auty had died in 1895 and picture postcards were produced by Hastings from Auty's plates as well as his own. The court size cards that Hastings issued from 1898 to 1900 are the earliest commercially produced cards to be found of Newcastle and the surrounding areas."
http://www.europese-bibliotheek.nl/nl/boeken/Newcastle_upon_Tyne_in_old_picture_postcards/100-136520/artikel/4

I get the impression that the Auty Series photos were not taken by George Hastings but were from earlier photos taken prior to 1895. Matthew Auty of Tyneside was a tobacconist and dabbler in photography. He gave up tobacco and set up a studio in Front Street, Tyneside. His views of the coast and surrounding countryside quickly became popular. Auty Limited claimed to have been the first to introduce the Continental idea of picture postcards to the north of England Auty’s views familiarised prospective visitors with the charms of the area.

I have found only one photo of the Fire-place on the net and it looks that these days there is a wooden supporting surround built into to the hearth to stabilise the structure.

The size of the Fire-Place is amazing and attests to the building skills of those who built the Fountains Abbey in the 12th century. 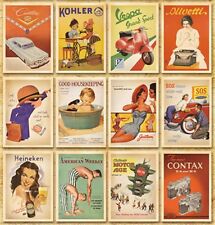