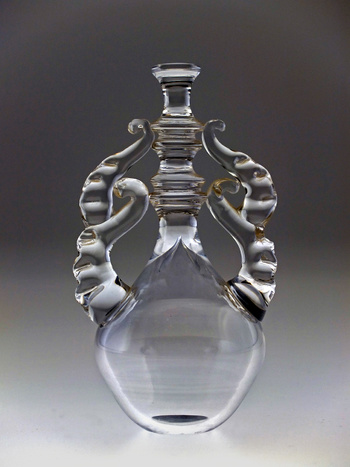 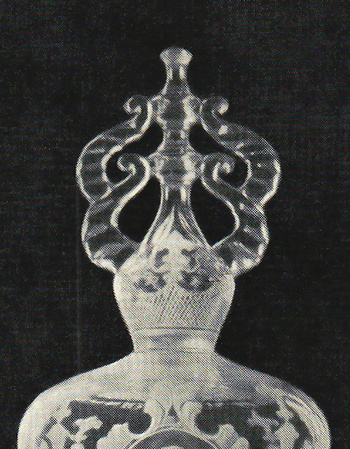 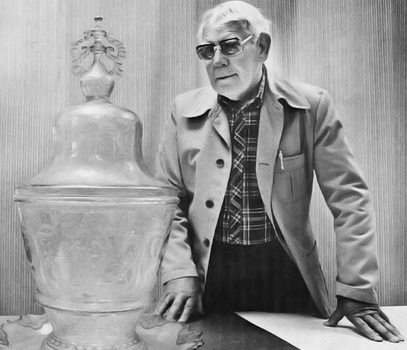 In my post number one hundred here at CW, I show something special. A second piece of a part of the famous "Parispokalen" from 1922. The cut and engraved glass from Orrefors became famous in the 1920s. With the 1925 Exposition International des Arts Decoratifs in Paris, Orrefors became firmly established in the international market. The most famous piece was the 1922 Parispokalen which the City of Stockholm offered to the City of Paris as a gift.

"Parispokalen" shows the finest of what Orrefors artists and craftsmen could produce, but it was not for sale. It was exhibited at the National Museum in Stockholm in autumn 1987. My father's cousin, and my own namesake, Nils Bergqvist ( image 3 ) helped his father Gustaf Bergqvist and my grandfather Knut Bergqvist when they blew it and gave it its forms. Engravers Gustav Abel and Elis Rydh then sat bent over their rotating cupper wheels in a 450 hours of work, to put Simon Gates pattern drawings to finished engraving in the glass surface. Nils have talked about this in DN (swedish newspapper) 11 June 1986. "We made 2 items of such magnificent pieces like Parispokalen . Only when one of them reached the addressee and fared there for a while without breaking, we shattered the other. Uniquely, it would be. How would it have looked like if there had been a copy of the Stockholm honorary gift to the city of Paris, in connection with a World's Fair? No, it was an impossibility."
DN reporter describes Simon Gates composition: " It is engraved with the views of the two cities and their respective weapons. Additionally, with more naked and dancing female bodies than even Rubens would have been able to press into the motif. Everything in accordance with the contemporary, and the artist's ideals. "

In preparation for Rickes and Gronerts exhibitions in 1987, GLASS IN SCHWEDEN 1915-60, they found the trophy war-packed, dusty and littered in the basement of the Paris City Hall. They had hidden it before the German occupation during World War 2 and then forgot about it there. In the summer of 1986 it was exhibited in Orrefors, and first got it washed and cleaned. No baby in Orrefors has been washed with the same care as that which got Parispokalen its glory back. Then it was on two shows in Germany in 1987 before it was displayed at the National Museum that autumn. Now, is said to have regained its honorable place in Paris.

But that there would be no copy of "Parispokalen" is not entirely true. There is a copy of the cover top preserved. My grandfather Knut Bergqvist, wanted to have a memory of the splendid piece, and therefore he made a copy of the cover top, which he put into his own collection of glass. Nor do I think he was really satisfied with what Gate had drawn for the cover top, and wich also became the final shape. Knut's own copy has namely less bulging upper arms. In my eyes, it has a more fitting shape.