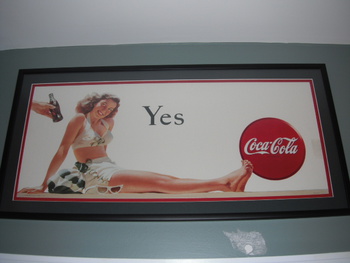 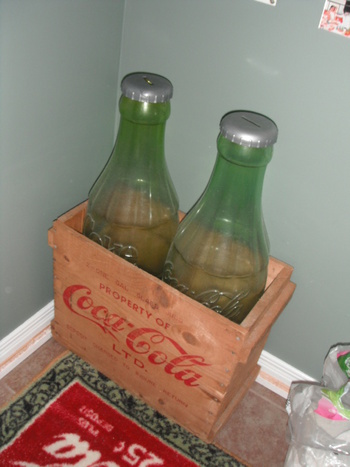 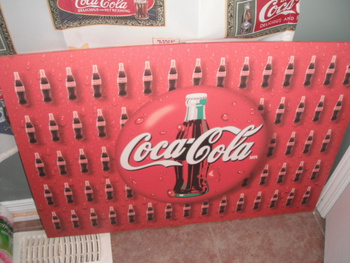 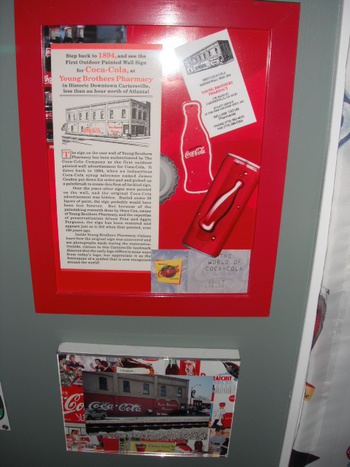 Pic-1 is, what I believe to be, an original cardboard advertising piece from the 40's. I got it at an auction for $10. It came with a few other smalls which I will post in the future. Has a little tape damage on the right and the corners are pretty good, but the graphics are sharp and clear. I had to say "Yes" to having it framed. I did leave the edges exposed.
Pic-2 is a simple syrup jug crate that I placed two plastic money banks in. They fit perfectly and look like they belong. I did have a bank bottle filled with pennies at one time. That I believe was the original intent for the banks. (Coca Cola is brown............pennies are brown............)
Pic-3 is a sample piece I got around 15 years ago from a Wilsonart laminate rep I dealt with. She knew I collected Coca Cola stuff and passed it on to me. Has a little 3D thing going. I had to have it laminated to a board because the plastic laminate will go brittle a break.
Pic-4 is a collage of items I got when I visited Young Brothers Pharmacy just outside Atlanta. Went there to see the first wall painted Coke sign. There's a photo of me at the wall sign below. The frame is from IKEA, and the background is from pages out of the investors report book. My ticket from my visit to the World Of Coca-Cola in 1996, business card and info card from the pharmacy are what's framed.