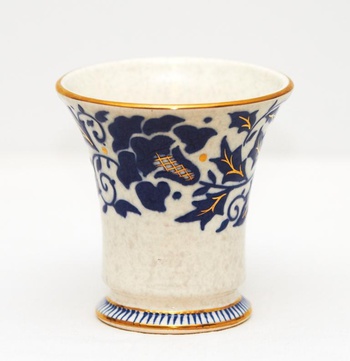 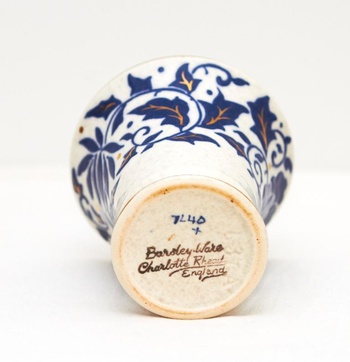 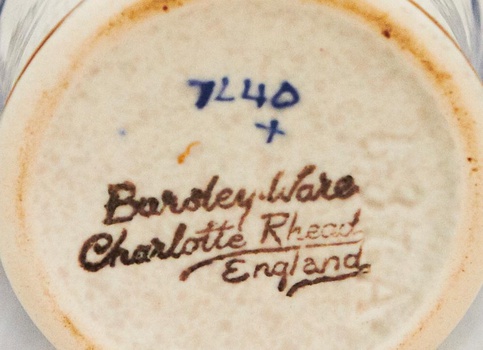 This vase is a little 'younger' than most of my other stuff, but I could not help buying it when I came across it in my favorite ‘used stuff store’ one day. Not only do I rarely find any English pottery here (apart from newer Wedgwood plates and things like that), this is also in very good condition with no chips or any other damage. It was designed by Charlotte Rhead (1885-1947), one of the three great British ‘pottery ladies’ (the two other being Susie Cooper and Clarice Cliff). She worked for a number of potteries, one of which was Wood & Sons (1865-2005) which introduced the so-called Bursley Ware (like this vase!) in 1919. Charlotte Rhead worked there 1912-1926 and again from 1941 to her death in 1947. There is a very useful site dedicated to Charlotte Rhead and her work here: http://www.rheadpottery.com/

Height: 10.5 cm. Mark: ‘Bursley-Ware’ and ‘Charlotte Rhead’. Moreover, the décor number TL40 (stylised carnations in blue with gold embellishments on a mottled grey glaze) and an impressed number. On the internet you will find this kind of pottery dated to the early 20th century, but the correct date is 1940’s. Her name was used only on 1940’s items.