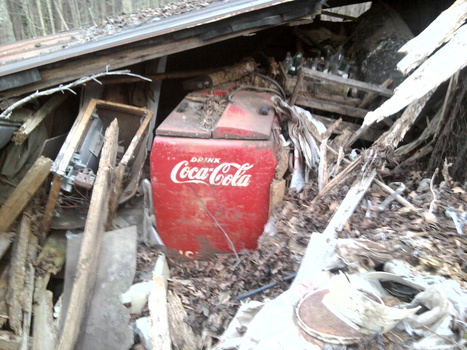 Hi everyone, don't know much about this unit except that it is in the middle of the woods at an old abandoned homestead. It appears no one has actually lived there since 1979 (calenders on wall) The cooler is under a collapsed lean-to. I was able to open the accessible door and other than being dirty it didn't look rusty. there was what appeared to be 2 hoses coming from the back of the unit, but isn't varified due to how much stuff its surrounded by. I believe it to be late 50's early 60's but not sure. On a side note, there are also 1000's of vintage coke, mt. dew, royal, primo (pepsi???) , etc everywhere as well as the wooden coke crates and an alluminum vintage coke display rack (sign has some rust).
Thanks for letting me share and Im eger to hear what yall think.