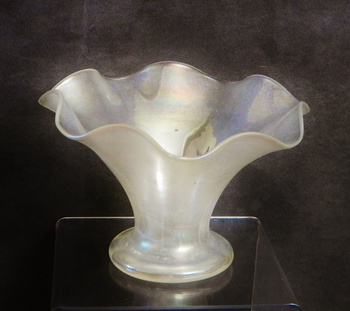 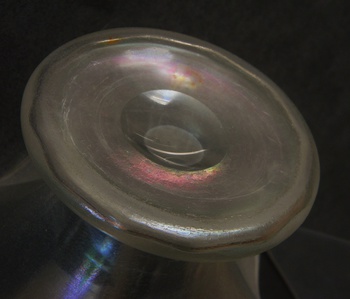 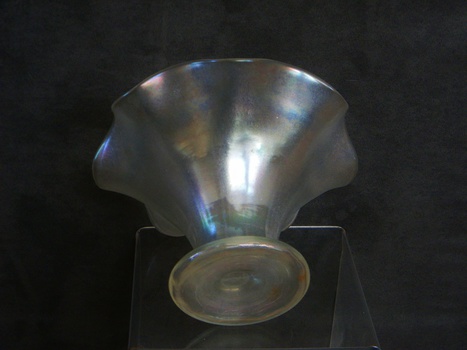 This is a vase I just picked up at the local Thrift Shop. I have been eying this vase for many months. So, today was the day I walked in and asked for a lesser price. I will not tell you how much less...but it was way under what I thought I could get it for. Now the research was on. I at first thought that this was a Poschinger. And upon further investigation....I found this was a Stueben Carder Iridescent Vase. I was thrilled to uncover a neat piece. This beauty stands 6.85 x 9.75" and still working on the rust stains. This is what I uncovered as of now:

Verre de Soie
, pronounced "v-air da swah", was made by Steuben Glass Works while Frederick Carder was art director for the firm from 1903 to 1933. This type of finish was previously known as “Flint Iridescent” when it was made as early as the mid-1880s by Stevens and Williams, an English glass company Carder worked for prior to co-founding Steuben, according to The Collector’s Encyclopedia of Art Glass by John A. Shuman III.

Referred to as "V.D.S." by Steuben’s employees, this type of frosty hue was achieved by spraying stannous chloride on a base piece crafted of clear glass. The result was a white surface with a very silky feel. And while it is hard to photograph, the finish also casts a faint rainbow spectrum that was popular with consumers. It was also Carder's favorite iridescent glass.

The name actually translates to "silk glass" in French. Consumers and collectors have referred to it as "Glass of Silk", "Angel’s Breath" and "Angel Skin" from time to time as well. When pieces are unsigned, this can be confused with white carnival glass or other glassware originating in Europe, according to Shuman. However, carnival glass is pressed or molded rather than blown, so Verre de Soie will have a more delicate overall feel to it and no mold lines or seams present in comparison.