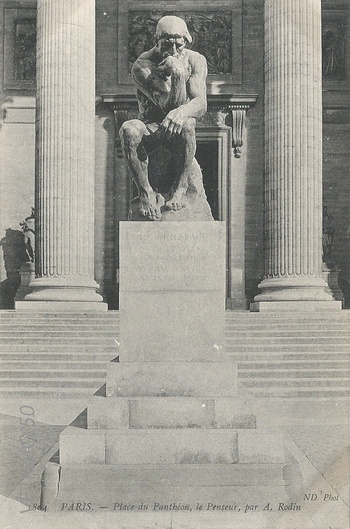 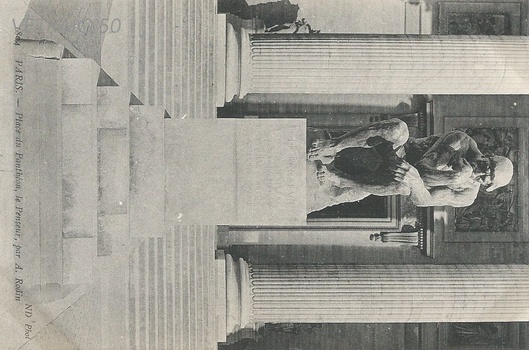 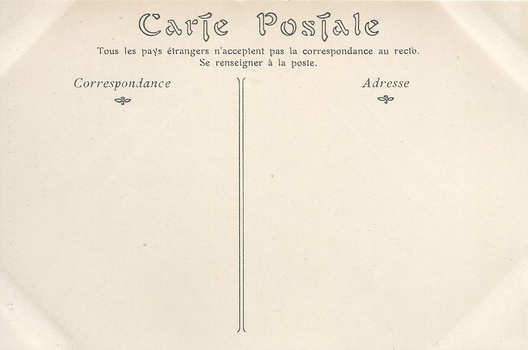 Septimus and Clara Muller visited Paris in 1907 and collected a card of Rue Soufflot and the Panthéon that I have posted already on CW. While researching that card I realised the significance of the card of 'Le Penseur'.

The Millers would have seen 'Le Penseur' in its original position in front of the Panthéon on their visit in 1907. 'Le Penseur' had been first presented to the public in 1904 and thanks to some of Rodin’s admirers the bronze was placed in front of the Panthéon in 1906. It remained there until 1922 when it was taken to the Hôtel Biron, which had been transformed into the Rodin Museum.

It was originally named ‘Le Poète’ or ‘The Poet’ .

Rodin began work on it around 1880 as part of another project: a doorway surround called ‘La Porte de l'Enfer ‘ or ‘The Gates of Hell’.

In 1880 the Directorate of Fine Arts commissioned Rodin to design an entrance to a planned Decorative Arts Museum that was never built.

‘Le Poète’ was just one of many of the doorway’s elements. A number of these elements were enlarged by Rodin and became works of art of their own: eg ‘Le Baiser’ or ‘The Kiss’.

Some say that ‘Le Poète’ depicts Dante at The Gates of Hell, pondering his great epic poem ‘la Divina Commedia’ or ‘the Divine Comedy’. Others say that the figure is Rodin’s self portrait contemplating the human condition.

It seems that ‘Le Poète’ was renamed 'Le Penseur’ by foundry workers, who noted its similarity to Michelangelo's statue of Lorenzo de Medici called "Il Pensieroso" (The Thoughtful One) in the Medici Chapel of San Lorenzo in Florence. 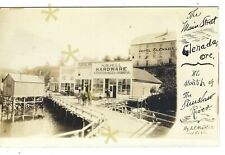 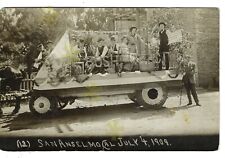 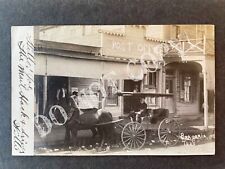 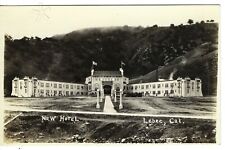