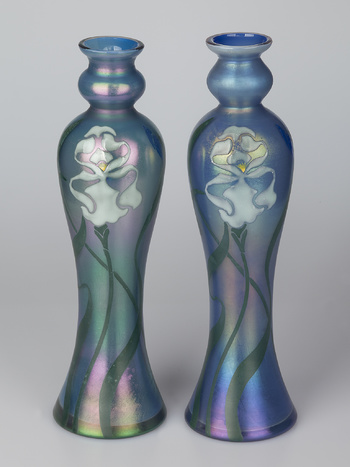 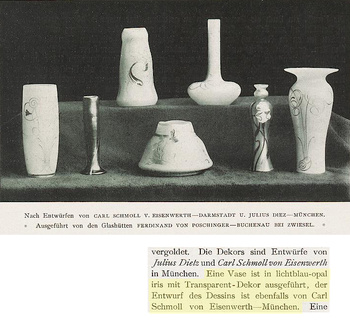 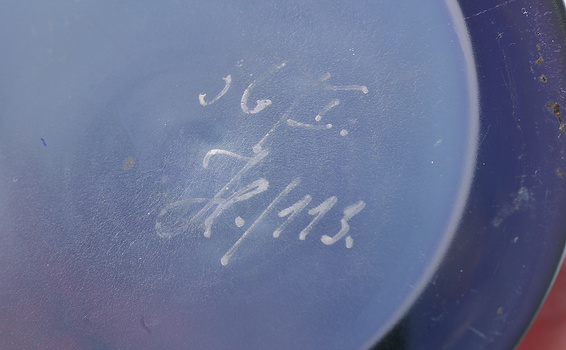 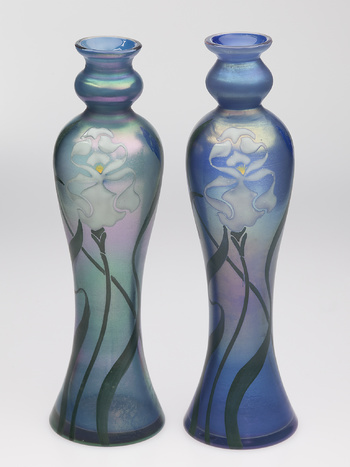 This pair of enameled vases was designed by Carl Schmoll von Eisenwerth for the Poschinger Glassworks Buchenau and exhibited at the World Fair in Paris in 1900. This is documented in an article of the magazine “Deutsche Kunst und Dekoration” (German Art and Decoration), edition 11/1900 on page 518 and 534 (second image). The vases are 23 cm (9 in) tall. The light opal blue cased glass shows a stylized white orchid blossom on the front side.
A similar but shorter pair (17,6 cm / 7 in) is displayed in the Passau Glass Museum and pictured in the catalog “Das Böhmische Glas 1700-1950”, Volume V, p. 23. Interestingly one of the two in Passau is fully signed “Ferd. von Poschinger Glashüttenwerke Buchenau Bayern No. 289”, whereas the other has no marks. Both vases here are marked with “56/I H./113.” From many other marked examples we can tell that 56/I stands for the shape (56) and its size (I). The second part is assumed to designate the decor and its designer. The letter H often is attributed to Betty Hedrich as designer. On other enameled pieces the letter S is part of the decor number and attributed to Carl Schmoll (von Eisenwerth).
Obviously these attributions are doubtful. Following this assumption, the vases here, designed by Schmoll von Eisenwerth, should be marked with the letter S instead of H. On the other hand the letter H should not be connected with Betty Hedrich as most art historians and vendors do. Likewise all four vases tell us that not all glasses of the same shape and decor are signed or marked and they underline the assumption that numbers of fully signed pieces are all unique.