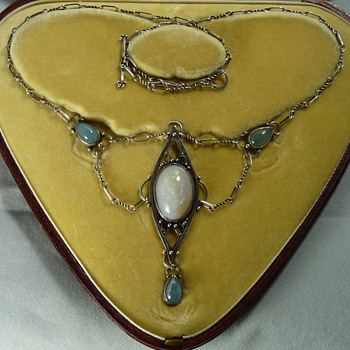 This is a large and eye-catching piece. The main section is 70mm high and the opal is 2o x 15mm, estimated at about 12cts.

The high domed opal is probably from the early days of Lightning Ridge. Only a small percentage of opal from The Ridge is black, and there's plenty of white opal like this.

I confidently attribute this necklace to The Artificers' Guild Ltd (more info below) based on the half oval joining rings with little silver dots on the ends, these are seen on several Artificers' Guild pieces.

The Artificers' Guild Ltd was founded in 1901 by metalworker and enamellist Nelson Dawson. In 1903 it was bought out by Montague Fordham (ex director of Birmingham Guild of Handicrafts). He set it on a more commercial footing producing furnishings, metalwork and jewellery.

Fordham promoted Edward Spencer, previously Dawson's principal designer, as director of the Guild's workshop in Hammersmith. Sales were through the Montague Fordham Gallery in Maddox Street where the works of John Paul Cooper, Henry Wilson and May Morris (daughter of William Morris) were already available. After WWI the showroom moved to 4 Conduit Street, off Regent Street.