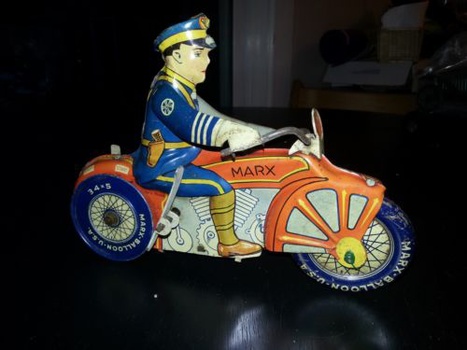 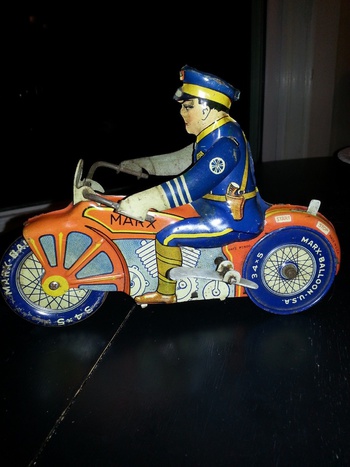 Here's my latest find, and my first motorcycle addition to my new collecting passion!!
The Police Tip-Over Motorcycle (formally named 1st version of the Rookie Cop) was one of the earliest tin litho cycles produced by Marx. It has the unique distinction of being the only Marx motorcycle which is able to travel a short distance, tip over, automatically uprights itself, and then continues moving ahead. It's a fantastic toy, but its tip-over ability is the reason why it's frequently found in well-used condition.

This toy is more complex than most of the other Marx cycles. In addition to its angled three dimensional front wheel, it uses a series of two flat tandem discs as its rear wheel. Spaced over an inch apart the clockwork mechanism is connected in between the two wheels. The wide separation stabilizes the vehicle once it's uprighted. On either side of the cop is a 2¼" paddle shaped lever. The levers are used to tip-over the motorcycle as well as upright itself. They're also used as keys to wind the clockwork motor. Pretty neat! It's also interesting to point out that Unique Art Mfg. produced a virtually identical toy during the same time period as the Marx toy.

The toy is made from heavy gauge lithoed tinplate. The driver's legs and front spokes are embossed. The handlebars are a single steel rod. He's depicted wearing an early Depression-era blue uniform and trimmed with yellow. He has a PD shield on his chest and wears two holstered sidearms. The motorcycle is red and orange with "Marx" lithoed across the gas tank. The tires are blue with blue spokes and marked as Marx-Balloon. It has a start/stop lever protruding from the left rear fender. I've always seen this toy with one half a shade different in color from the other and this is no exception. The left side of the cycle is a mandarin orange color while the right is bright red. This was not due to fading and was originally manufactured in these colors.

The toy originally sold for 59¢.