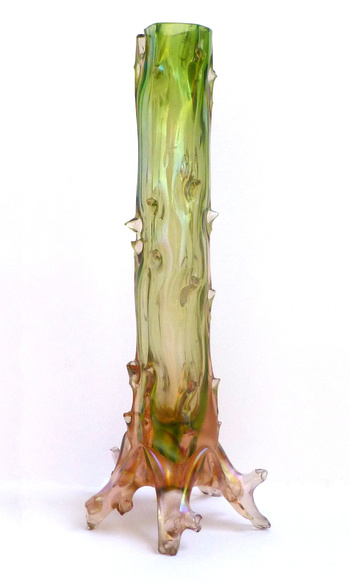 Since there have been discussions of thorn vases on CW lately, I wanted to share one I have had for a few months that I find to be quite unusual. It is a single thorn vase, in an unusual soft peachy-pink, transitioning to green at the rim. It may be hard to see in my picture, but it is finished in a flashed iridescence, which I have never seen on other thorn vases before.

The reason I suspect my thorn vase to be Welz is that (besides the fact that I obviously believe Welz made thorn vases) I have seen quite a few Welz glass baskets (they often have a distinctive molding pattern on the body and twisted or thorny handles) in the same unusual shade of peachy-pink and green. When I discussed this with Welzebub (Craig) several months ago, he mentioned that he had seen examples of Welz glass in a flashed finish. So while I am not sure of the maker of my particular thorn vase, I do personally feel it could definitely be another example of a Welz thorn.