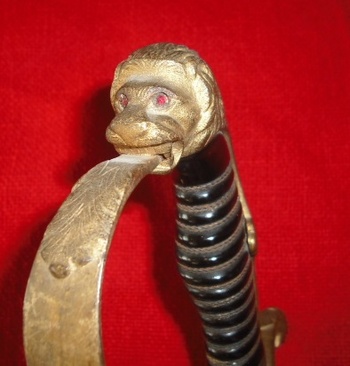 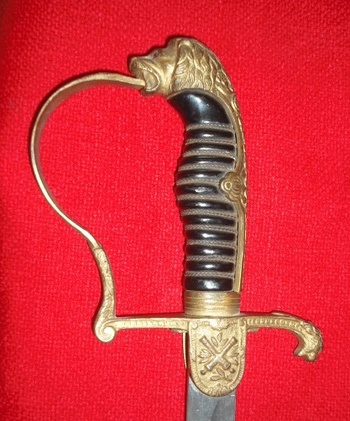 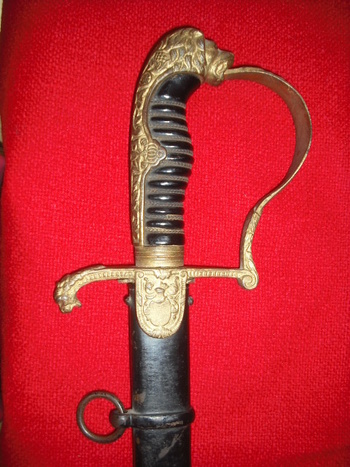 This sword, sometimes referred to as the model 1898, was the dress sword worn by Imperial German cavalry and artillery officers. The only difference between the two branches was that the artillery had crossed cannon instead of crossed cavalry sabers on the langet. Similar swords were also used after WWI in both Weimar and Nazi Germany. The Nazi ones usually have a swastika where the crossed cannon are.

This particular sword has no maker’s mark that I can find. The polished single fullered 30 3/4 inch blade is un-etched. The hilt is a dull gilt covered ferrous metal, and may have been re-gilt at some time as the gilding covers the gasket between the hilt and the blade. The pommel features a “ruby eyed” lion. (In reality more likely red cut glass). This was an optional feature on these swords that seems to have been quite popular. The guard is done in floral and scrollwork patterns with a smaller lions head on the finial. The grip is double wire wrapped Bakelite.

I bought this on eBay several years ago. The seller’s listing read “Cut that meat like a master - a sword for your barbecue.” As a result I think a lot of potential bidders never found the listing or didn’t pay any attention to it. Anyway, I got it cheap.