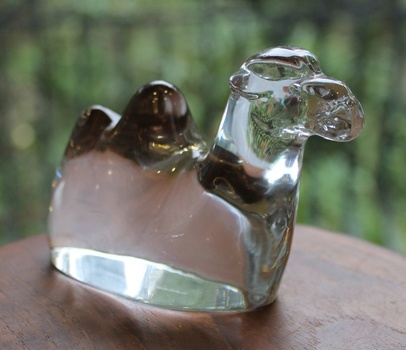 This two humped camel is unusual in a couple of ways.

Firstly - I have not seen any other animals styled like this and made by Sasaki. Maybe it was a series and I just haven't found any others, or maybe it was speeeshul.

Secondly - Two humped camels, Bactrium, are quite rare. Apparently only a 1000 or so still live wild in the Gobi Desert in China and Mongolia. There are a million or so domesticated however, but nothing like the 14 million dromedaries (single hump camel) domesticated worldwide.

Interesting fact - Australia has the largest feral dromedary camel population in the world. Last count, around 700,000. They were originally brought here by Afghani who helped open central Australia for telegraph, road and rail.
I think we have now started exporting them....is that right Vet?