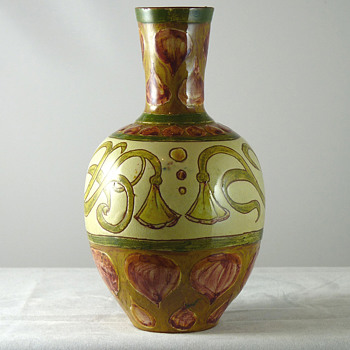 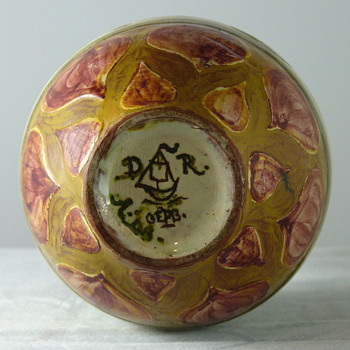 This Della Robbia Pottery vase is 6in high, with a gorgeous design and colouring. It is marked GEMB for Gwendoline Buckler, with what looks like a decorator's mark "A" and an indistinct date mark.

The Della Robbia Pottery was located in Birkenhead, Cheshire from 1893 to 1906 and was started by Conrad Dressler and Harold Rathbone, who was a pupil of Ford Madox Brown, one of the founders of the Arts and Crafts movement.

As a result of the spread of Arts and Crafts ideals, painting on pottery was considered a suitable dignified form of employment for middle class women, and many of the female Della Robbia artists were daughters of industrialists from the well-to-do Oxten area of Birkenhead, while others were enlisted from the local art schools.

Gwendoline Buckler was a worker at the pottery for several years. She was involved in some prestigious pieces, including the large pot presented to Queen Victoria for her Diamond Jubilee.