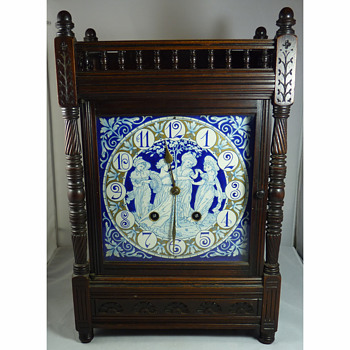 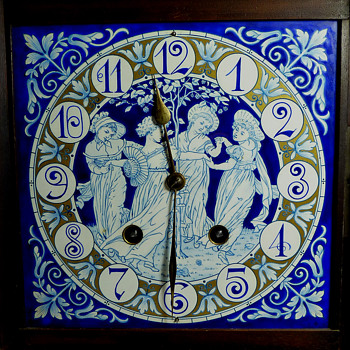 In the early 2000's I picked up "The Aesthetic Movement" by Elizabeth Aslin in a second hand book shop and was fascinated by this Victorian prelude to Art Nouveau.

After reading more of the book when I got home, I logged on to eBay and nearly fell out of my chair when this clock came up in one of my searches. I had just finished reading about this exact type of clock in the book a few minutes earlier (p68). Needless to say the seller didn't know anything about the clock, however they could see it was quality, and I had to pay what seemed like a lot of money at the time.

The hand decorated blue and white face is detailed with gilt, and comprises a 7.5 inch square enamel face depicting the nursery rhyme, "Here We Go Round the Mulberry Bush", from Walter Crane’s 1878 children’s book "The Baby’s Opera". The clock's numerals are examples of the stylised calligraphy of Lewis Day.

The dial is marked Elkington & Co, whose art department, headed by Albert A. Willms, produced exquisite enamelled items for a brief period of only eight or nine years, commencing in the mid 1870's.

The mahogany case is 17 inches high and 11 inches wide, and the clock has a quality eight day quarter striking movement by Winterhalder & Hofmeier.

Walter Crane (1845-1915) studied under John Ruskin. He was one of the first artists to use brilliant colour in children's picture books, and is among the most famous C19th book illustrators. His work is strongly influenced by the Pre-Raphaelites, and he made a major stylistic contribution to the development of Art Nouveau. He worked with William Morris at Merton Abbey in 1883, designing the Goose Girl tapestry, and in 1888 he helped launch the Arts and Crafts Exhibition Society, of which he was the first President. The object of the society was to draw attention to the Arts and Crafts movement, and the craftsmen included William Morris and Edward Burne-Jones. From 1894 onwards Crane worked for Morris' Kelmscott Press. He was appointed part time Director of Design at the Manchester School of Art from 1893-96 and the Principal of the Royal College of Art from 1897-98.

Lewis Foreman Day (1845-1910) was an artist and prolific writer on design subjects, most famous today for his wallpaper designs and calligraphy, in which can be seen the early seeds of Art Nouveau. In the early 1880’s he led a group of writers, designers, and theorists known as the Fifteen, who in 1884 merged with The Art Workers Guild, that included Walter Crane. In 1888 members of the Guild formed the Arts and Crafts Exhibition Society, including Philip Webb, William Arthur Smith Benson, Lewis Day, William Lethaby and William de Morgan. Their first exhibition in 1888 at the New Gallery included works from their own members, the Century Guild, Morris & Co and the Guild of Handicraft. The latter, also founded in 1888, was headed by the architect Charles. R. Ashbee, and Day and Ashbee were the Guild of Handicrafts' principal designers.

In their later careers Walter Crane and Lewis Day continuing their long association to design a number of the most spectacular Royal Lancastrian ceramic lustre pieces for Pilkington & Co.