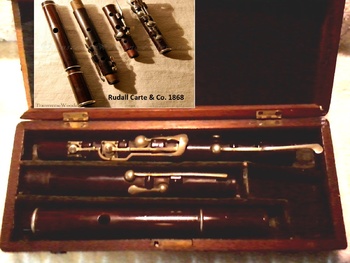 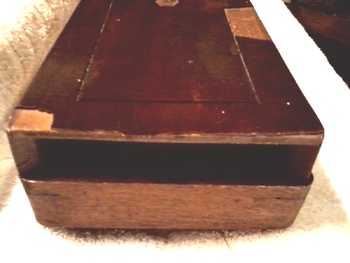 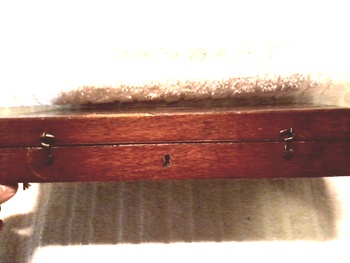 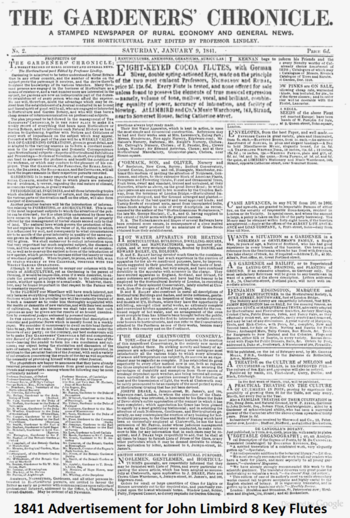 I've seen musical instruments at stores before but this has got to be the oldest one (175 yrs.) I've come across while I was at Savers today. I'm not an expert on antique woodwinds but I really wanted this despite it's sorry state. The box is badly damaged but I don't think it would take much to make it presentable again. Lined in green velvet it's missing some veneer and the center medallion as well as the end of the lid. The instrument itself seems complete. It took me a bit to figure out how to put it together. I was even able to coax a couple of notes out of it once I did. It really needs restoration as it's missing two or three of the silver rings (ferrules) and there are also two fine hairline cracks in the wood at the top section and tuning barrel. The keys are made of German silver which was not silver at all, but an alloy of nickel, copper, and zinc. The wood is a beautiful warm brown red color known as cocoawood or cocuswood. It was the preferred timber in the heyday of English flute making. It is very rare, and therefore pretty expensive today, but it is not extinct, just commercially unviable. There are stamped marks on two sections. It reads J. Limbird & Co. "143" and then "Strand" underneath it. The lettering is rather worn from handling but readable with a magnifying glass. This is the retailer's name but not the maker's. It appears to be a Rudall, Rose design but it is not marked as such. -Mike-

Note : 6/24/15
Many thanks to aghcollect for finding me info as to the retailer John Limbird.
John Limbird (1796?-1883) was an English stationer, bookseller, instrument retailer and publisher.
J. (John) Limbird's Stationary and Music Warehouse
143, Strand (near to Somerset House), London
Several references going back to between 1829 and 1840
The maker is still a mystery but maybe it can be traced now that I have a time frame and this bit of information. However, it looks similar to a Rudall, Carte & Co. (c. 1868) instrument shown on transversewoodenflutes.com site. So maybe they made flutes for Limbird to sell and never marked them. -Mike-

Eight -Keyed Cocoa Flutes with German Silver,double spring-actioned keys made on the principle of the two eminent Professors Nicholson, and Rudal, price 2L 12s 6d. Every flute is tested, and none offered for sale unless found to posses elements of true musical expression-namely, volume of tone, mellow, vocal and brillant, combining equality of power, accuracy of intonation, and facility of blowing, At LIMBIRD and Co.'s Music Warehouse, 143, Strand. Near to Somerset House, facing Catherine street.

So going from the 2L 12s 6d in 1841 Pounds to current British Pounds this instrument cost the equivalent 213.20 pounds today or $335.47 US dollars. A lot of money for that time. Provided I haven't calculated incorrectly. -Mike-