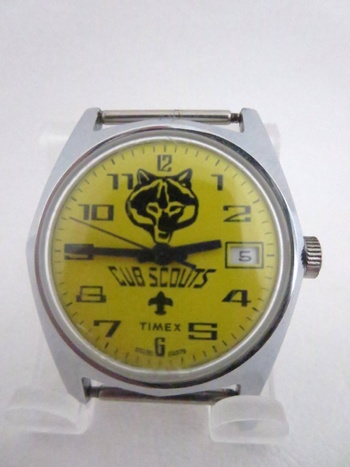 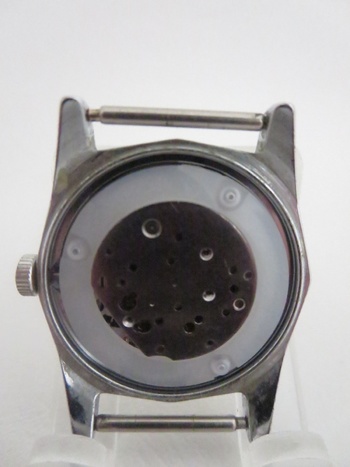 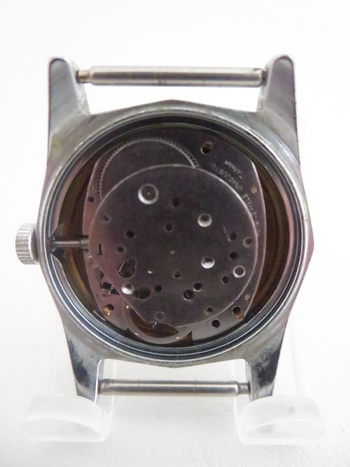 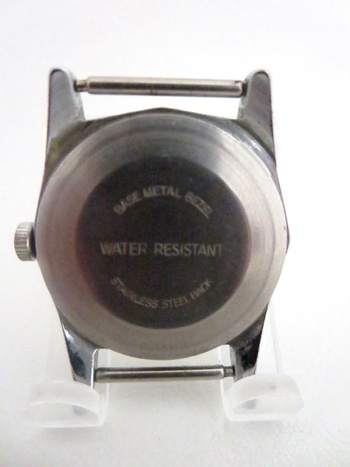 This is a Cub Scout wristwatch by Timex
The series of numbers on each side of 6 o'clock is: 23338 02579
Movement is marked:
891 TIMEX NO (0) JEWELS UNADJUSTED TAIWAN
Inside the back cover is marked:
CASE
GREAT BRITAIN
TIMEX

Since its origin, the Scouting program has been an educational experience concerned with values. In 1910, the first activities for Scouts were designed to build character, physical fitness, practical skills, and service. These elements were part of the original Cub Scout program and continue to be part of Cub Scouting today

The Scout Law
A Scout is TRUSTWORTHY A Scout tells the truth and keeps his promises. People can depend on him.
A Scout is LOYAL A Scout is true to his family, friends, Scout leaders, school, and country.
A Scout is HELPFUL A Scout volunteers to help others without expecting a reward.
A Scout is FRIENDLY A Scout is a friend to everyone, even people who are very different from him.
A Scout is COURTEOUS A Scout is polite to everyone and always uses good manners.
A Scout is KIND A Scout treats others as he wants to be treated. He never harms or kills any living thing without good reason.
A Scout is OBEDIENT A Scout follows the rules of his family, school, and pack. He obeys the laws of his community and country.
A Scout is CHEERFUL A Scout looks for the bright side of life. He cheerfully does tasks that come his way. He tries to make others happy.
A Scout is THRIFTY A Scout works to pay his way. He uses time, property, and natural resources wisely.
A Scout is BRAVE A Scout can face danger even if he is afraid. He stands for what is right even if others laugh at him.
A Scout is CLEAN A Scout keeps his body and mind fit. He helps keep his home and community clean.
A Scout is REVERENT A Scout is reverent toward God. He is faithful in his religious duties. He respects the beliefs of others. 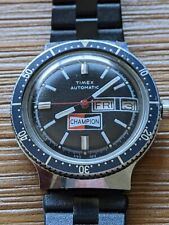 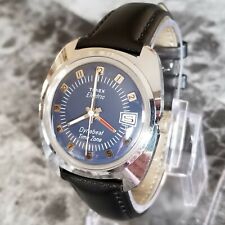 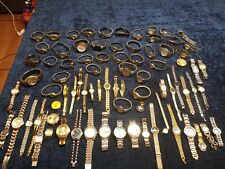