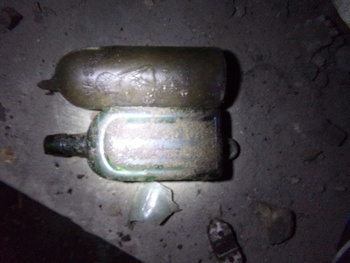 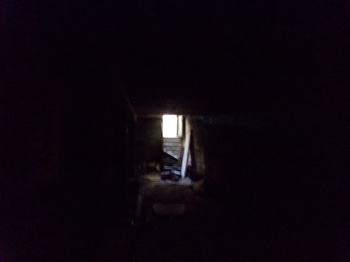 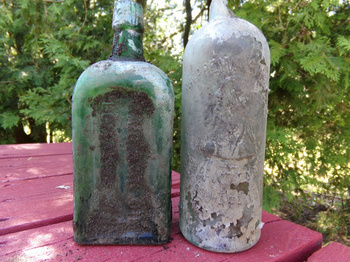 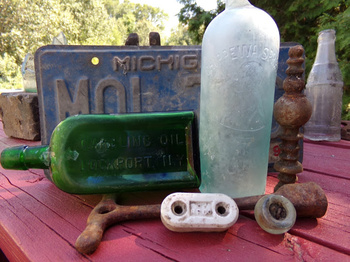 Pic one is of the bottles pulled out and seeing the first light they've seen in over 100 years.
Pic two is the room I was digging in. Dirt floor, hole in wall for me to dig in.
Pic three is the bottles as I got them home-- I don't wipe them off as the sand can scratch the glass. I swish them in water and swish water in them before beginning to rub then scrub in water.
Pic four is my finds in that building for the day I'm showing. 2 common bottles from the 1890s, a vintage license plate, an intact top to a bottle, a rare wiring cleat, a finial, and a tool-- ooh, so exciting! LOL.

To see another location, copy and paste this link:
http://www.collectorsweekly.com/stories/178606-exploring-urban-ruins-one-of-my-many-fo

Now for the Story:

A saliva-coated mini LED flashlight sticking out of my mouth and focusing down on the ground before me (sometimes a rope of saliva slowly making its way down the beam,) I'd take my trench-shovel (I feel so bad for the soldiers who gotta dig real trenches with these things!) and tear my way into the dirt floor beneath my feet as my presence disrupts the air to knock decaying cobwebs from the ceiling and onto me.

But, oh no!! Water atop a thick clay layer at 1 foot down! How am I to dig through this with a flashlight in my mouth, myself alone, with a trench-shovel? And it's a sticky clay too-- the kind that sucks anything touching it down-- including the bottles. Ugh!

But, still, I went back every Friday for a few weeks to spend two hours each dig doing this in the dark room pictured above.
I made row after row-- like shallow trenches, really-- back-filling as I went along to try and find everything I could that was left.
I even dug into a hole in the wall, thus finding what is photographed in pic one (the wiring cleat, which is the little white thing, from 1906/1907 came out of the ground, not wall.)

I determined that digging beyond the first support post was not necessary (Praise Jesus!) as the artifacts were all from the back wall to it (I found a porcelain hen's head and most of a circa-1905 bottle when digging around the post, though. Most shards I piled up in a corner.)

Every time I made an intact/mostly intact find, I'd thank God for it and look it over before setting it aside or in my pack and continuing.

Still, even with tiring excitement, things could get even more exciting-- after all, a dark abandoned building in a run-down location, with no one to hear you and signs that people enter the other rooms (not this one, as I had to clear my way into it) is kind of.... Not scary, but there was always a mental warning.

And warnings I got: Footsteps right above my head! Listen to the old wood creak and debris crunch!
Oh no, the're now descending the metal stairs full of crumbling bricks that have fallen in from the ruins of the building's top in an artistic cascade down the stairwell of sunlight streaming through!

And I hid behind the thin support-column and stayed quiet, listening, fretting as the steps neared the door.

I would peak around the column, hoping the blackness of the windowless 1890s room would hide me-- but, wait!! My backpack was in a spot light from the doorway would reveal! But I dare not grab it.

And I continue peaking, being quiet, staying calm albeit my heart was beating more than just faster-- could it be a cop? One of the homeless living here? Someone or thing that was actually a threat?
Heck, what if they locked the door that still has a latch?
Oh heck, that's so unlikely. Coward!

But, indeed, there were threats living in that building-- not only crumbling walls in dark rooms full of debris and peeling lead paints, all the while water-filled holes in the floor drop down to depths unknown, but also plenty of animals living in and around it-- I found two dead animals in that room alone, one living one in a hole in the wall I'd later crawl into in my archaeological pursuits-- and oh, how it growled!

Did they leave the debris-strewn areas to tread on the clearer cement floor? Or were they just waiting for me to make more noise so they could find me-- the room, after all, was obscure and behind a rail bent toward it. Nothing of interest in that corner.
It had sat next to an exit, but I tried the door and it wouldn't budge-- but another exit, through a collapsed wall, was quite near from that main area.

And, impatient, I quietly began to dig around the support column I hid behind. Eventually, I got up and set back to work, thus finding more artifacts to catalog, clean up, and photograph then display in my "museum" called my bedroom.

In the end I came out with my first dug porcelain bottle stopper, which had the name of what was once a brewery next-door to this building. I brought out only two intact bottles (only one embossed,) shards to a few rarer bottles, an 1860s penny, an insulator, a paver, tools, an early-1900s fluorescent lamp-starter (who'd have thought?) tobacco-pipes, and more.

One day whilst going back into the building, this time to remove badges from old machines, I was stopped by the new owner who was walking out from a neighbouring building. I had my camera with me, and so I told him that I photograph old buildings-- indeed I do, but I didn't tell him the rest. LOL.

So we talked for an hour, and I was pleased that he planned on fixing up the vast building and converting it into something that should help our stagnating local economy.
He said maybe he'd let me in there for photography again, as I admitted to being in there before for it (most of my pics came out less than how I desired, so I wanted to re-do them) with supervision due to severe safety issues (who cares about safety?)

And thus is a series of digs written into one very short (kidding, lol) post. :)

I hope, if you made it this far from the top, that you enjoyed.
If ya didn't read it, I hope you liked the pics.

Another story pertaining to this building, with myself being struck by a car, here:
http://www.collectorsweekly.com/stories/176640-my-best-dug-coin-1869-indian-head-no-m

Oh, yeah: All of this only because 1 bottle's shard was on the surface. And on it all I could read was MIC.