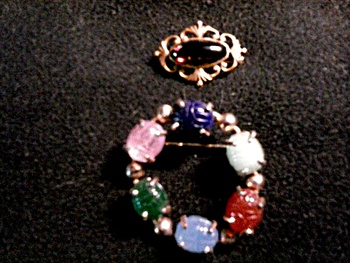 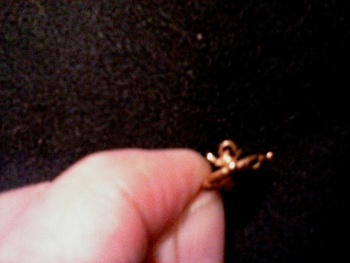 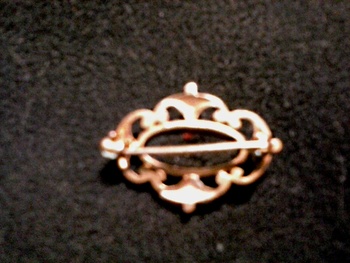 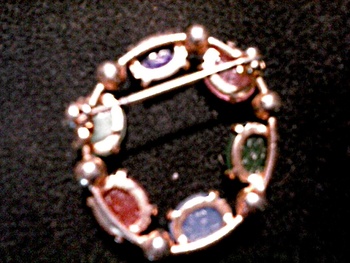 It's been a long time since I've been able to post any jewelry from Salvation. My cashier friend has been exiled to production since they're short handed so her jewelry cases are suffering and almost bare. Clothes are more important to get out on the floor for some stupid reason. But, for half price day she was finally able to do a few pieces and here's two that caught my eye. The tiny 3/4" Victorian pin is marked 14K and a quick trip to the jewelers ID'd the stone as a garnet. Total weight 2.9 grams. The clasp is really interesting. An old "C"shape with a tiny lever on the back side that locks the pin in place from underneath. Sadly the garnet cabachon has been shattered at one end. Not really visible to the naked eye because it's so petite, but catastrophic when viewed through a loupe. Like a small rock hitting your windshield. Bulls eye !! It could be reshaped but you'd lose a lot. The cost would be the same to replace it entirely so it's best to be left as is. The circular scarab pin is a beauty, but unmarked. So it's nothing more than costume with faux stones and a gold tone mount. Still pretty cool and only a few dollars for both. -Mike-