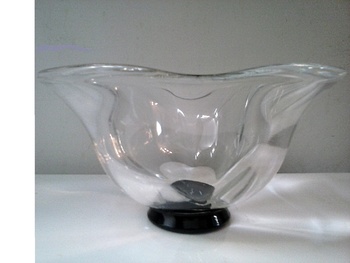 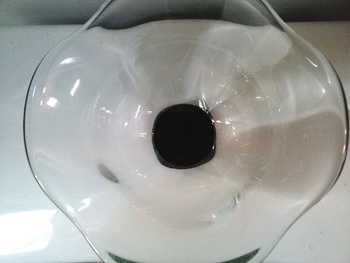 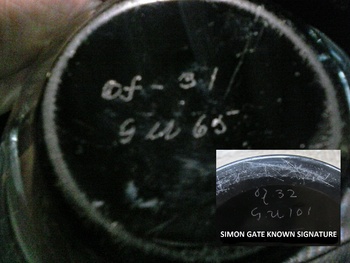 This was quite a surprise from Goodwill today. I knew the mark was Orrefors but I wasn't aware of the exact age or the designer involved. I figured it had to be old simply judging from the wear ring on the bottom. I think the 31 may be the year. The mark matches up with a bowl that sold on 20thcenturyceramics.co.uk site for Orrefors designer Simon Gate. Since it's sold there was no price listed. What values I have seen go from hundreds to thousands so I guess it depends on the designer and the decor. There are others like Edward Hald and Vicke Lindstrand who designed similar pieces. Some with beautiful engraving and some without. This is an average size bowl 4" H x 8 " in diameter. It has a wonderful undulating lotus shape. The ring when you tap it is amazing ! There are no chips or cracks but there are a few hairline scratches in the crystal. Not objectionable for it's age as it was very dirty but cleaned up nicely. -Mike-

Simon Gate and Edward Hald
Courtesy of the metmuseum.org and orrefors.us

Production at Orrefors did not become significant until the 1910s, when Johan Ekman of Gothenburg, who had highly ambitious production plans and had realized the importance of design, acquired the glassworks. A number of proficient glass artisans were recruited. Ekman wanted to place production on a more artistic basis, and in 1916 he, therefore, engaged the services of Simon Gate, the portrait and landscape painter. Trained as a painter and an illustrator, Gate had no previous experience as a designer of three-dimensional objects. Unhampered by tradition or convention, he became one of the most innovative and influential figures in the early development of twentieth-century art glass. The artist Edward Hald arrived in the following year. This laid the foundation for a vital tradition of Orrefors, in the form of close cooperation between skilled glassblowers and gifted designers.
In view of the artistic background of both Gate and Hald, it is not surprising that their individual styles flourished in art glass, not household glass. Gate's more classical designs differed greatly from Hald's modern, freer creations. Hald had also studied with Matisse, the famous French artist, and this is reflected in his glass.