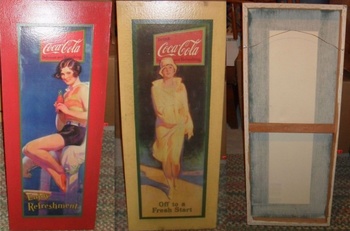 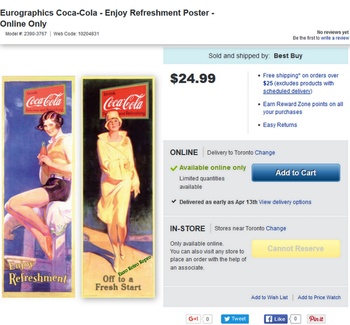 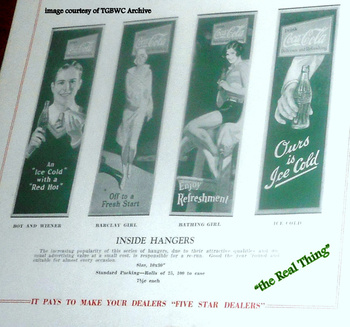 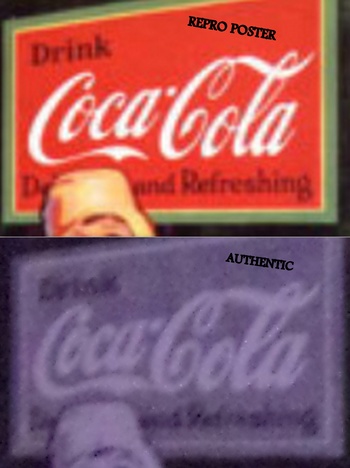 Always happy to share my good deals collecting old Coca-Cola, only fair that I do the same when making a misstep. Such was the case recently when I purchased these beautiful framed signs for $500 total off an eBay BIN. I'd never seen anything like them.

I thought there was a pretty good chance they were a pair of 1929 10x30 paper Coca-Cola signs that had been conserved some time ago by being mounted on canvas and stretched across painted frames. But I wasn't sure, so I contacted TGBWC and Edisonfan for input.

After an hour or so of back and forth, we concluded they were not right. The first alarm bell went off when we found the same two retro style posters on the Best Buy Euro website. Next we assessed the logo wasn't quite right, comparing against collector guides and an original price list at TGBWC's archive. Chad was skeptical from the start, his good instincts were dead on as usual. The clincher was hearing from Ray that one of his sources recognized these as German retro art put out around Y2K.

So I canceled the transaction same night with explanation and funds were soon restored. It was a close call. This reinforces a couple important rules of Coca-Cola collecting: Examine the logo carefully and if the deal seems too good to be true, it likely ain't a good deal.

Having a couple rock solid good guys with which to bounce things around, helps too. (Thanks Dudes)