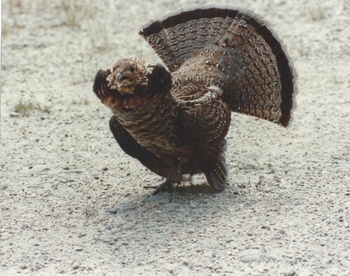 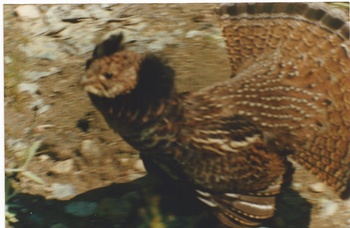 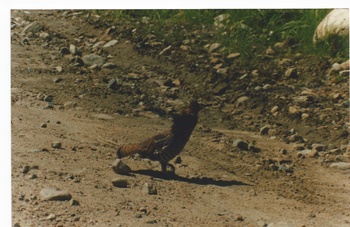 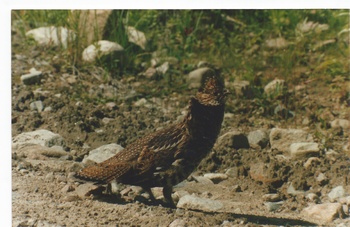 Good Morning CW Members--- 1:30 AM)2016-7-15
When i was part of a group of Birds Watcher specialist on the field looking for nesting birds, we face many birds behaviour, when some simulate injury(Kildir, Ruff) , other become really furious(Falcon, Owl) when some others just attacked.
This what happen to me during this summer of 1989 when I was in the region of Manic 5 (Daniel Johnson Dam).
I just walking along the forest road, listen mostly Warbler and Sparrow, i just doing fine taking note of what i could expect to see(regarding what i ear) when suddenly coming from nowhere a Ruffed Grouse start walking toward me, displaying there foliage nicely, making terrible noise, well well i think this male want to hide something, he try hard to get me away from the side road(tactic commonly use), I decide to go on the opposite direction, bad choice, this little fellow start to charge me, picture 3 and 4 are is attended to attracted me in one direction, picture 1 is when realize i am not fallowing and finally picture 2 after hitting my leg(that's explain the out-focus)
A day later I was able to raise the nesting code from territorial (the attack)
to chick present(5), i see them crossing the road with the couple.

The ruffed grouse (Bonasa umbellus) is a medium-sized grouse occurring in forests from the Appalachian Mountains across Canada to Alaska. It is non-migratory. It is the only species in the genus Bonasa.

The ruffed grouse is sometimes incorrectly referred to as a "partridge", an unrelated phasianid, and occasionally confused with the grey partridge, a bird of open areas rather than woodlands.

The ruffed grouse differs from other grouse species in its courtship display. Unlike other grouse species, the ruffed grouse relies entirely on a non-vocal acoustic display, known as drumming. The drumming itself is a rapid, wing-beating display that creates a low frequency sound, starting slow and speeding up (thump...thump...thump..thump-thump-thump-thump). Even in thick woods this can be heard for a quarter mile or more (~1/2 km).

The ruffed grouse spends most of its time quietly on the ground, and when surprised, may explode into flight, beating their wings very loudly. In the winter, they will burrow into the snow for warmth, and may suddenly burst out of the snow when approached too closely.