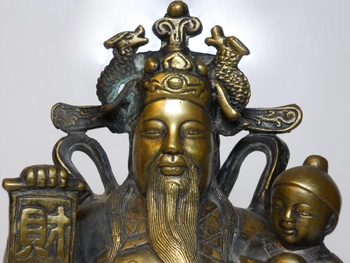 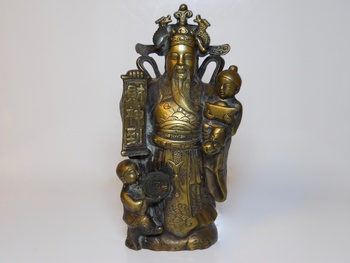 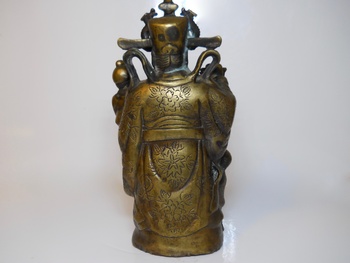 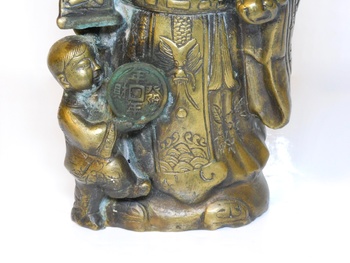 Good Morning CW Members--- 12:00 AM)2016-8-14
I found this Chinese God Of Wealth at the salvation fews week ago, all in Brass, go a the scale for an impressive 9.5 pound, the Chinese culture venerate the God of Wealth at the new year, they so many of them, I was very lost when i research it, i am confident that I found the good one, his name is "Ruyi Ruyi"

Dehua Caishen, c. 1600-1644, Royal Ontario Museum
Several versions of Caishen's incarnations' political affiliation and way of deification are circulated.It is unclear whether they are genuine historical figures, though most of the stories agree that Caishen's most popular incarnation lived during the early Qin dynasty. Most probably it represents the merging of several heterogeneous legends, the one of Bi Gan being the most ancient.

Legend has it that Bi Gan had a wife with the surname Chen. His son was Quan (?). After Bi Gan was put to death by his nephew King Zhou of Shang, Bi Gan's wife and son escaped into the woods. His death eventually marked the collapse of the Shang dynasty. Later on, Quan was honoured as the ancestor of all Lins by King Wu of Zhou.

Notwithstanding the above, there is another legendary character of the Chinese God of Wealth which is generally known as Caibo Xingjun (????) amongst Chinese communities. Li Guizu (???) was born in the Zichuan District in Shandong Province and held position as a country magistrate. Li Guizu contributed significantly to the district, whilst people built a temple to worship Li Guizu after his death. The late Li Guizu was then conferred the title Caibo Xingjun by the Wude Emperor of Tang dynasty.