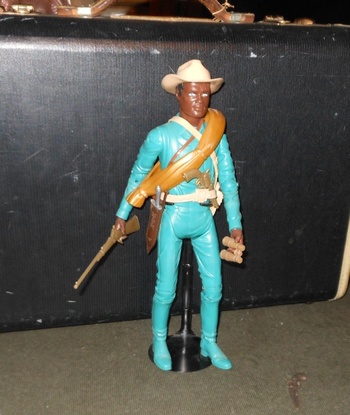 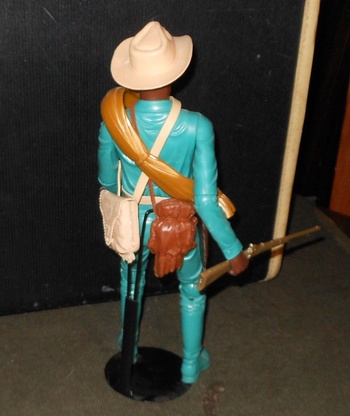 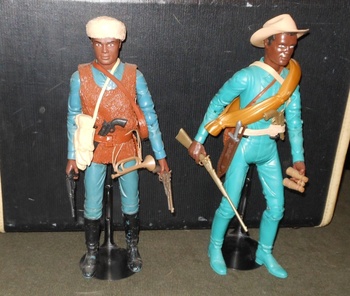 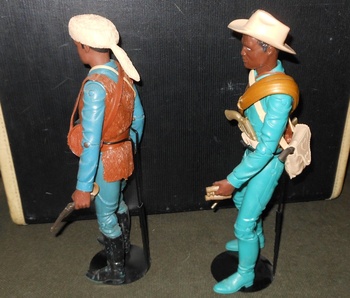 In 1975 Marx released the Johnny West Adventures line. Jed Gibson, cavalry scout, was the only new figure released. The most notable feature is that Jed was the only black figure in the line. This is the holy grail for most Marx action figure collectors. Unfortunately I don't have the box for this one. The box is probably worth more than the figure and accessories. Eventually I will find the box at the price I want.
Jed came with a set 13 accessories which is on the low side for accessories that came with the Marx figures. These were the same accessories that came with Bill Buck. His accessories were a combinations of pieces from the cavalry and Daniel Boone figures.
Jed Gibson had a different colored body than the other cavalry figure. My other Jed figure has a repro head on a vintage Marx cavalry figure. I use him to model the pieces don't fit on my original Jed.
The hard plastic accessories were molded in gold and the soft pieces were brown or cream. As with all the figures of the Johnny West Adventure line each figure would come with a mixture of the colors. Which of course means that completists would need two of each figure to get all the color combinations. Toy collecting can be a bit exacting.