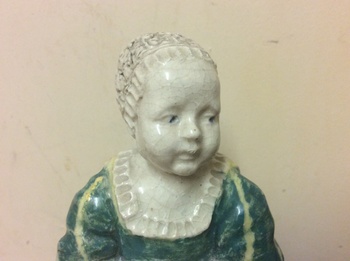 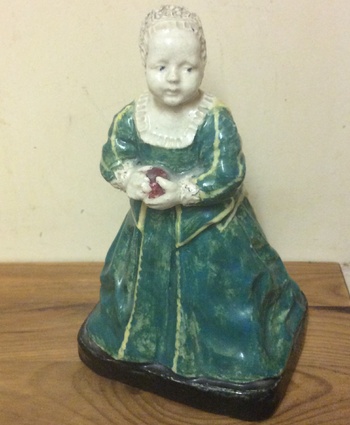 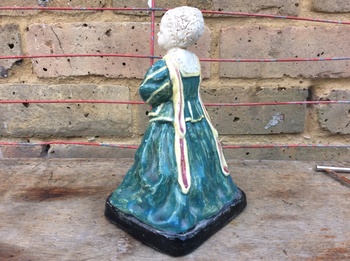 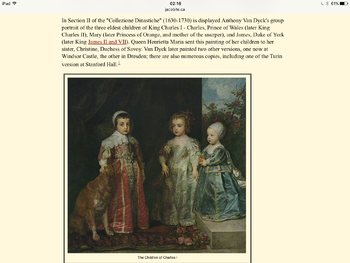 This pottery figure I believe is a one off artist's piece, the image is taken from a famous Jacobite 1600s painting by Anthony Van Dyck in the galleria Sabauda Turin (Turin gallery) of Charles I children. In the painting is the three eldest children of Charles, prince of Wales (later King Charles II), Mary (later princess of Orange, and mother of the usurper, and James duke of york, (later King James II and VII) of England. James II of England is the image of the child this pottery figure has been modelled on, I believe this was probably made by an artist due to the research I have done, this is near certainly a one off piece of Royal memorabilia. I have uploaded a picture of the painting so you can compare the image for yourself. Item is unmarked and I believe it to be 19c but I am not really positive on the age it could be early. Please let me know how old you think the item is. I will change the pictures about to show the base later on if you need to see more but let me know. Does anyone have any clue as to what country this was made in, I know it's European but to me it could be anywhere as I have nothing to compare it with. Item has had its head off at some point just like they did in that time, nice clean break though. All other info on this item would be gratefully appreciated, by the way I bought it at an antique fair with a few other bits the dealer told me it was a young Queen Elizabeth. They could not have got that much more wrong being a man and the clothes worn being 300 yrs prior. Any help on age would be grateful definately old but could be really old, let me know what you think.