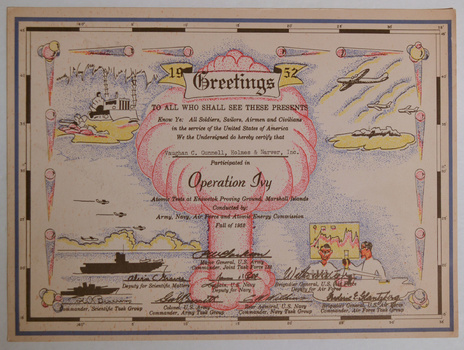 The 1946 disaster did little to slow the desire for bigger and louder explosions. By 1952 the U.S. was on its eighth series of tests. Operation Ivy was a series of two detonations. The first detonation (Mike) was the first hydrogen bomb test and one of the largest of any of the nuclear tests. The bomb was exploded on the surface of Elugelab Island in the Eniwetok Atoll. It created a huge amount of fallout and permanently removed Elugelab from the map. This was deemed a success.

The second test (King) was an air drop over Runit, also in the Eniwetok Atoll, of a large but more "conventional" type nuclear device.

Civilian participants were sent a letter of thanks along with this "fine" (read not so fine) document suitable for framing.