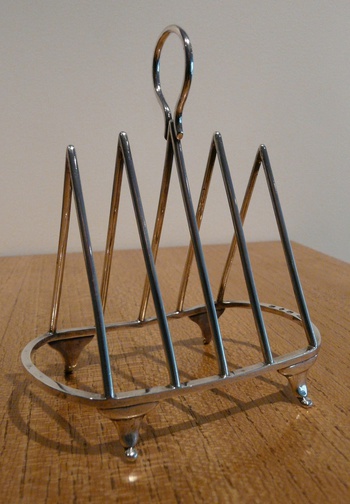 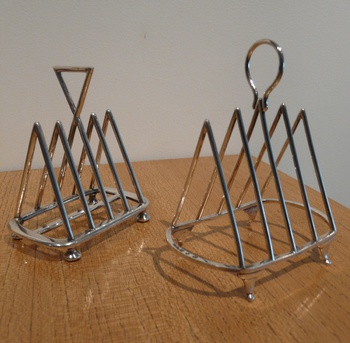 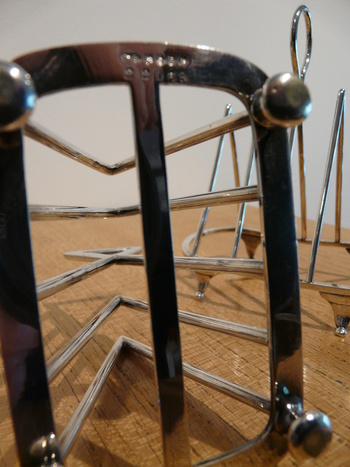 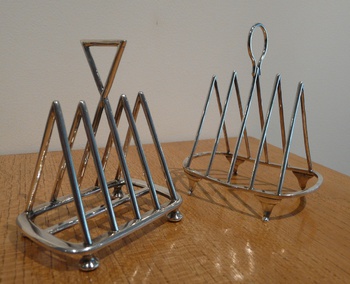 Two toast racks. One silver and the other silverplate. The sterling silver one was bought last Sunday and the other I have had for ten years.

Thoroughly useless objects these days I suppose. These ones took my eye because of their shape.

I've been aware of the designs of Christopher Dresser for some time and I know that he created some toast racks for Hukin & Heath and James Dixon and Sons. One of them has a design based on triangles. He designed for a number of companies. In more than a way, I see him as the father of modern industrial design.

I don't think these are Dresser designs. But I believe they were influenced by his innovative ideas, for sure.

It was made by William Hutton & Sons of Sheffield England. The mark suggests a date earlier than 1900 when they added some crossed arrows to the mark.

The sterling silver one has S.I.Ld, Lion passant, italic 'u' for 1894 and the Birmingham anchor mark.

The makers were Stokes and Ireland Ltd. They registered their mark in 1892. They worked in Chester too and were still manufacturing silver in the 1960's.

These days Alessi in Italy have taken to reproducing some of the designs of Dr. Christopher Dresser (b Glasgow, 4 July 1834; d Mulhouse, Alsace, 24 Nov 1904).