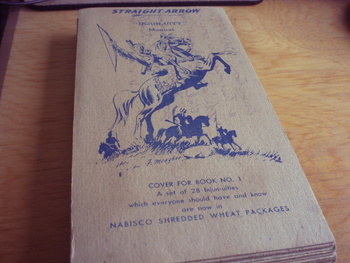 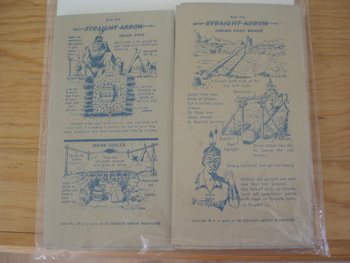 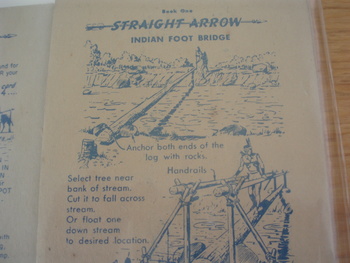 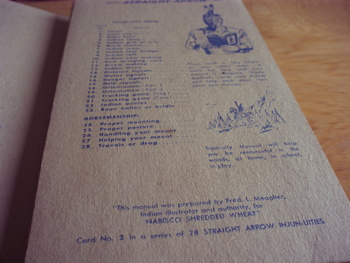 I'm sure many of us remember eating those Nabisco Shredded Wheat biscuits for breakfast. It was a change from porridge and tasted good with sugar or jam on top while it was floating around in the milk in your cereal bowl. The Straight Arrow cards in the above photos replaced the plain cardboard inserts that separated the 12 biscuits into 4 layers of 3 biscuits in the boxes of shredded wheat starting in 1949. The cards measure 4" wide by around 7 1/4" tall. One thing I found while checking information online is that Book #1 and Book #2 were done with the blue ink and Books #3 and #4 done in green ink. The set I have above is Book #1 and contains 28 cards. From what I have been reading it is stated that each set contained cards numbered to #36. I haven't been able to find any info. on why the set I have says a complete set consists of 28. I'm thinking maybe the Canadian set was smaller then the American set. The cards were inserted into the cereal boxes from 1949 to 1952.

Straight Arrow first made his first appearances almost simultaneously on a radio program and on "Injun-uity cards". These two projects were tightly coordinated projects backed by the National Biscuit Company and its advertising agency, McCann-Erickson. After a six month test-run on a local radio station in California, the radio series and the publication of the Injun-uity cards ran parallel with each other from 1949 to 1952. Nabisco was the sole advertiser on all the radio programs.