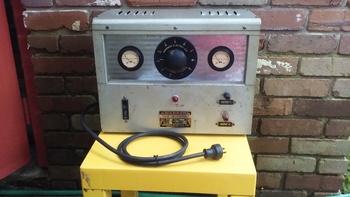 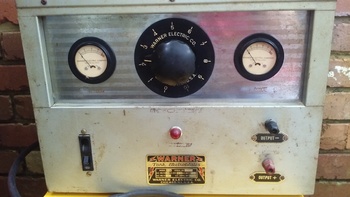 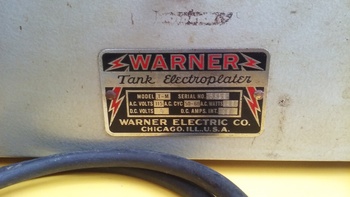 OK, enough of the dishes and glassware -- let's move back to "assorted old electrical things" instead. ;-) :-)

This device is a TANK ELECTROPLATER made by the Warner Electric Co. of Chicago. I'm guessing it dates from the 1940's-60's but don't really know, I've had it for a few decades myself now. (during which time it has mostly served me well by holding up a stereo speaker or something...)

If I understand correctly how electroplating works, this box is likely basically just a large low-voltage DC power supply, which would be used by connecting wires to its binding posts that in turn would be attached to some sort of 'sacrificial electrode' and a 'metal item', both to be submerged in a vat of some specific chemicals. When then cranked up, the electricity this device produces would react with the chemicals and actually transfer metal from the 'electrode' to the surface of the other item -- thus "plating" it.