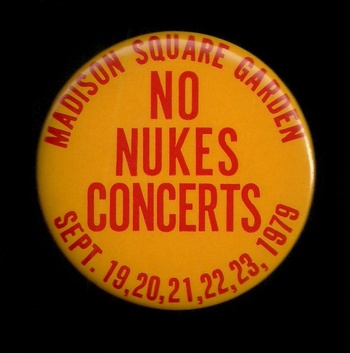 This button was used as the "Backstage Pass" to allow participants, support workers and likely a few lucky guests full access to the following concert.
No Nukes: The Muse Concerts For a Non-Nuclear Future
September 19-23, 1979 at Madison Square Garden that was recorded to make the triple live album that contained selections from the concerts by the Musicians United for Safe Energy collective. Jackson Browne, Graham Nash, Bonnie Raitt, and John Hall were the key organizers of the event and guiding forces behind the album.
This was the first official appearance of Bruce Springsteen and the E Street Band's much ballyhooed live act on record, and their "Detroit Medley"
There were a number of buttons and badges made for promoting and commemorating this event however not like this limited edition backstage pass.
The album was certified a gold record by the RIAA in September 1980 and was reissued as a two-CD set by Elektra Records in October 1997