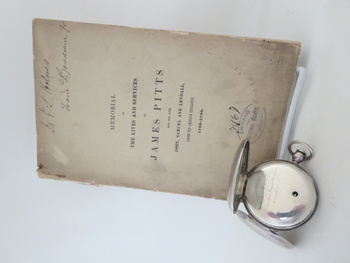 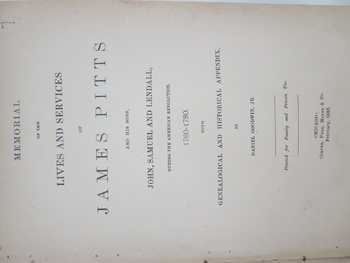 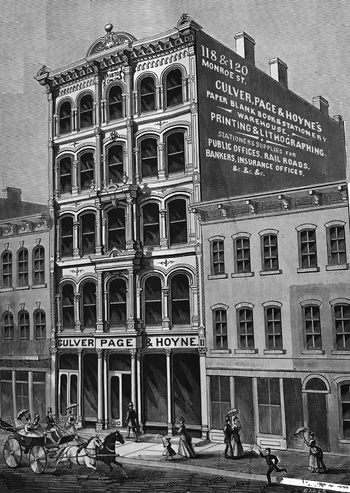 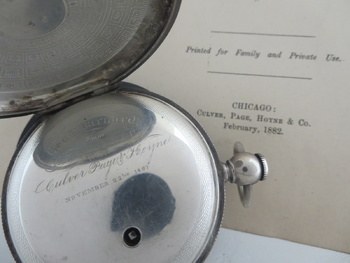 About 3 years ago, I made a post on a National Watch Co. (later became the Elgin Watch Co.), pocket watch that I have and consider it of some historical significance.

The watch case dust cover was inscribed as a presentation to: Geo. D. Barnard (who owned a very successful stationary business in St. Louis, Mo.), From His Friends With Culver, Page & Hoyne November 22, 1867.
Culver, Page & Hoyne's was a successful printing & lithographing company in Chicago, Ill.

Howard Zoroaster Culver is the Culver, in Culver, Page & Hoyne, and he also was one of the 8 founders and investors of the National Watch Co. of Chicago, Ill. in August 27, 1864.

The reason for this post is because I recently acquired a booklet that was published by Culver, Page & Hoyne & Co. Chicago, on February 1882. The book, which is 63 pages, in 5 folded sections, originally bound together by string (which most have deteriorated), is a Memorial of The Lives and Services of James Pitts and His Sons, John, Samuel and Lendall, During The American Revolution 1760 - 1780.

I tried to take a photo of the watch inscription and the part of the title page showing the publishers, Culver, Page & Hoyne. My amateur photographing skills could not get all the glare off the watch dust cover inscription.

To see more about this watch, see my post from 3 years ago at:
http://www.collectorsweekly.com/stories/143322-h-z-culver-national-watch-co-elgin-w?in=collection-726

Thanks for letting me share a little early American history with you,
Dave