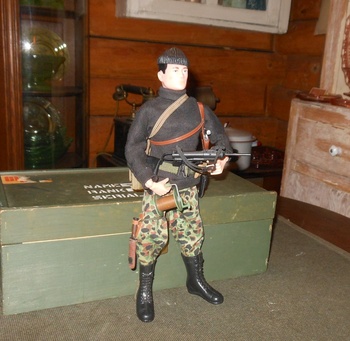 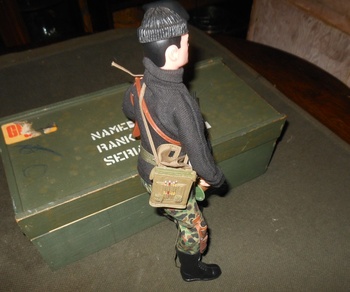 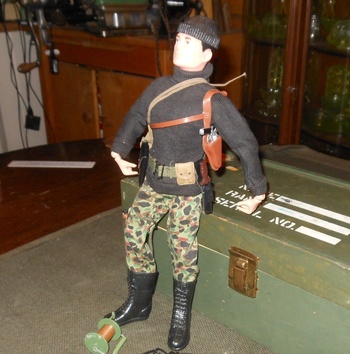 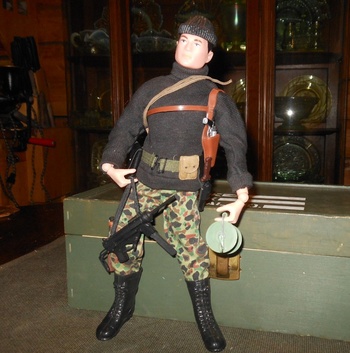 The GI Joe figure here is a Masterpiece edition figure from the 1990s. Until recently he was a Green Beret but I switched that outfit to a vintage GI Joe. Anyway I was digging through my spare parts and found the Palitoy shirt from the Sabotage set. Palitoy was the British version of GI Joe made under license from Hasbro. The hat is probably also Palitoy although it is unmarked. Probably circa 1970. The pants lack the tag but I think they are GI Joe or a good vintage knock off. The boots are vintage knock offs.
The shoulder holster and pistol is a repro from the GI Joe Club. The original shoulder holster was sold with the French Resistance Fighter and then with the GI Joe adventure series of the 1970s.The rest of the pieces are from various Ultimate Soldier sets sold in the 1990s. They were very generous and their sets came with a ton of accessories. Featured here is the M3 Grease Gun, belt, .45 ammo bag, knives and more.
In the meantime I have 5 more reproduction figures and a bunch of accessories. It will be great fun.