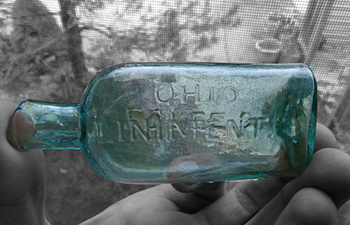 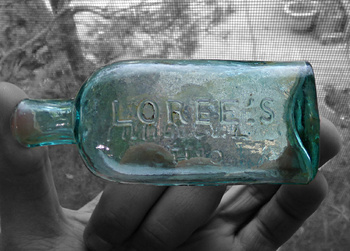 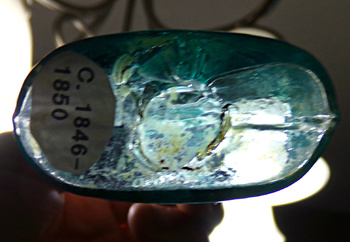 Loree's Ohio Liniment is interesting in that it came out at about the same time as one Coffeen's Chinese Liniment. As they were essentially the same product in the same city (Lebanon, Ohio,) things went sour between them.

Loree claimed that his liniment was the original version, stolen by one Mr. Coffeen who produced a 'Chinese liniment'; of course, Coffeen wasn't too pleased about the claim, and he himself countered that Loree stole his formula and was selling a knock-off.

At the time, 'stolen' formulas and 'fraudulent' knock-offs (often of already fraudulent products) were a common thing, so advertising was the way to alert the public that yours is the original and safest and most-sold and most-effective-- "Beware of imitations!" "Proven safe and effective." "None others genuine."

Things began to get heated, as both not only advertised against each other in rude and harsh newspaper blurbs, but even went so far as to have themes of one crushing the other (symbolically) engraved on plates for the daily newsprint.

After Coffeen took Loree to court over it, a judge ruled that Loree was the original inventor and had every right to market his product.

While things should have been looking up for the Ohio Liniment, to the point that Loree went with the slogan, "Protected By Law!", things suddenly went downhill for his business.

Coffeen again took him to court with new evidence, though Loree continued to advertise that every trial saw him rise above 'the snake'. Still, Loree's Ohio Liniment suddenly vanished from existing records in 1849. Thus, we expect to see it off the market by 1850.

Coffeen's venom must have done its damage in court, reputation, and finances, as Loree succumbed to obscurity and the last of his bottles were tossed out-- only to be dug, and researched, many decades later by interested collectors.

Coffeen had successful business into the 1870s, eventually dropping 'Chinese' from his product's name.

In the end, we cannot be too sure on who was original with it, if it was even the same formula. Regardless, the story is interesting for this 170-year-old medicine.