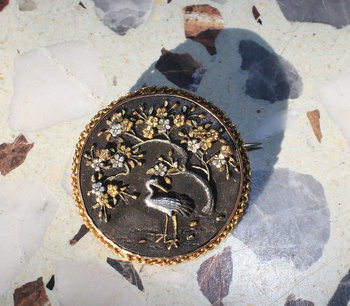 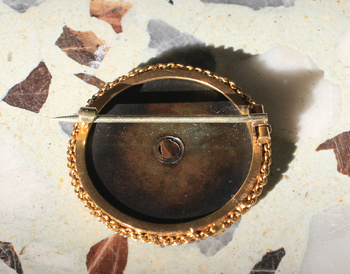 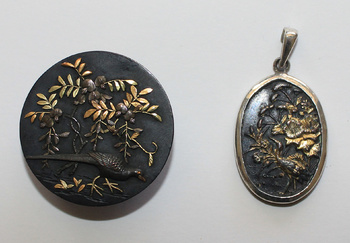 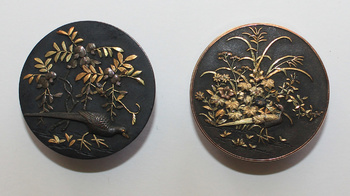 My second post is this time a little bit about Shakudo (at least, what i could observe on the Shakudo pieces that I own...)
On the internet one can read a lot about the end of the Japanese Edo period and the beginning of the Mejii period, the end of the Shogunate and the fall of the Samurai class, leaving most weapon smiths in need to find new fields of work (for example: http://www.christies.com/Features/Meiji-period-art-5-things-to-know-8521-1.aspx). Also about the alloy Shakudo itself one can find quite some information (see for example here: https://www.ganoksin.com/article/brief-notes-on-shakudo/).
Unsatisfyingly, nobody really explains the different types of decoration and techniques applied in Shakudo pieces.
Well i will give it a (still unsatisfying) try...
First of all, I think there needs to be made a distinction between pieces originally made for the traditional Japanese market (such as sword fittings, clasps for tobacco pouches, Kagamibuta etc.) which were later converted into pieces of jewelry.
In contrast to that there are those Shakudo pieces (usually plaques of different sizes and forms) which were produced in Japan but from the start were intended to be set into pieces of jewelry in various workshops across Europe.
Looking at the back side of the Shakudo pieces might help to see if they are in primary or secondary use.
The backside of the brooch in Picture 2 for example shows an alteration. The Shakudo disk once had an attachment which was quite crudely removed in order to fit it in a brooch. According to the C-clasp, the swiveled cord made of gold laid around the disk, this brooch was made during the Victorian period.
The two pieces shown in Picture 3 are Shakudo plaques made in two different techniques (in the case of my plaques they were used separately, but in other pieces those two techniques were used together):
The left one is made in inlay technique using small preformed stems, leaves, flowers made of silver and either different alloys of Gold (in this case red and yellow) or gilded metal, which were then inlaid into the plaque.
The right one is a Shakudo plaque which was cast in one piece. Fine details such as the feathers of the stork and the veins on the pedals were added by hand engraving. After that, parts of the plaque (pedals, stems, stork) were gilded or silvered.
One can easily see the differences in quality. No comparison between the left one which was made by a master, and the right one, which looks almost mass-produced.
The fourth picture shows another plaque which also was made in inlay technique. The craftsmanship is finer and more alloys (Shakudo, Shibuichi, Rokusho etc.) were used in order to give the foliage an stunningly realistic appearance. This stands in contrast to the left piece on Picture 4 which looks not less intriguing but almost modernistic with its simplified leaves and blossoms.
Quality of design and execution vary greatly among the Shakudo pieces. It is quite easy to find pieces which were more crudely executed and carelessly gilded as the one in Picture 3 on the right side. However, it is more difficult to stumble across fine, labor intensive pieces which testify with their quality to their makers excellence.
Some very fine pieces can be seen in Peasejean55 post (https://www.collectorsweekly.com/stories/211814-part-2-japanese-shakudo-panels), showing inlay and gilding
A movie made about the metal artist Ford Hallam shows the making of a Tsuba (sword guard) and the work with Shakudo and is decoration with different techniques:
https://www.youtube.com/watch?v=wGMj7o6AwnM