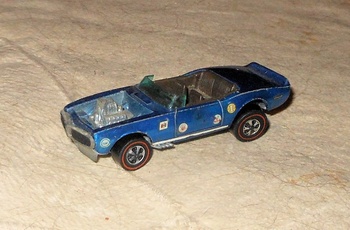 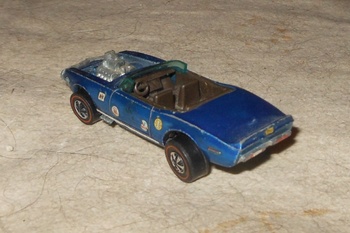 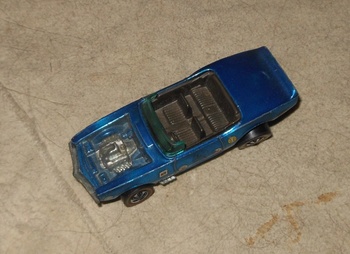 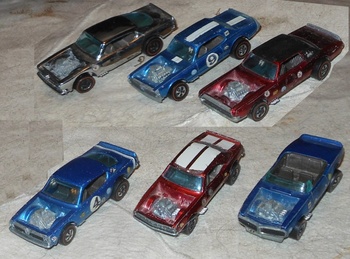 Hot Wheels Monday just does not work but Matchbox is still involved here as they started the 1/64 scale die cast model car concept. Mattel came out with Hot Wheels in 1968 which did not go well for Matchbox.
On to the Spoiler series. Spoilers are the front and year air foils designed to keep cars firmly on the ground. Spoilers were popular on cars in the late 60s. As for the Hot Wheels Spoiler series in addition to the spoilers they had exposed engines. The engines were blown like a dragster, also they had headers for the exhaust also a dragster feature. Each car had a large racing number on each door which was not a dragster feature. More a stock car thing but mostly a toy car designer thing. Each car came with a sheet of decals of sponsor stickers which would be seen on almost all dragsters. The original Spoilers were made from 1970-1971. Two more were added in 1972.
Featured here is the Light My Firebird. It was based on one of the original Sweet 16 Hot Wheels the Custom Firebird. All of the Spoiler series were based on models from the Sweet 16.
The last photo shows the first models of the Spoiler series. A pair of King Kudas, the Heavy Chevy, Light My Firebird, Nitty Gritty Kitty and TNT Bird.
Matchbox Monday shall return next week but there shall also be more Hot Wheels.