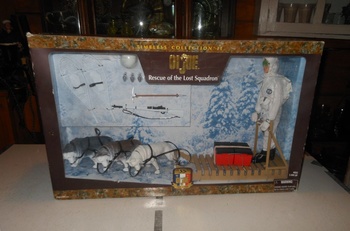 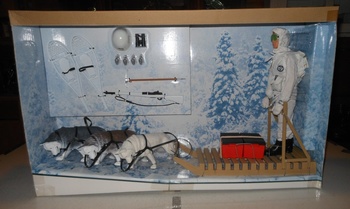 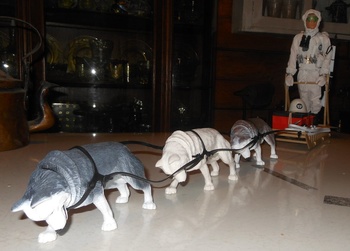 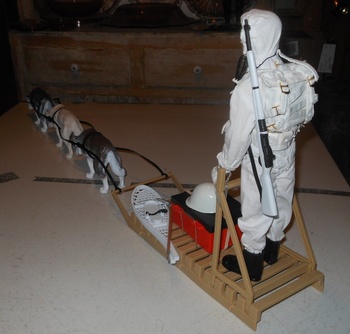 This set is a reproduction and combination of different sets. The sled, dogs and the equipment on the sled are from the 1969 "The Fight For Survival". That set was from "The Adventures of GI Joe" which was a transition set to the GI Joe Adventure series. No GI Joes with life like hair and beard at that point. The uniform and equipment were from the Mountain Troops and SAki Patrol sets that were sold starting in 1964 I think. The set doesn't have the skis but has everything else. Includes some bits only available on cards like the cartridge belt and helmet.
The dogs are a bit different in this set, they are rubber, a bit larger and have their heads down. Also the chests should have orange tops. But then again I think some sets had the mismatched chests and lids. There was a jungle adventure set that had the black chests.
This set is vey displayable (my 6th grade teacher would hate very displayable) in the box but I have removed it anyway. I prefer my toys to be free. I am keeping the box though.
It is rather impressive once unboxed. It is 35" long. I think I'll add a part 2 later with my other mountain troops. Maybe get a white sheet for a proper background or perhaps we could get a bit of snow. And then find a sentence to wrap up this post.