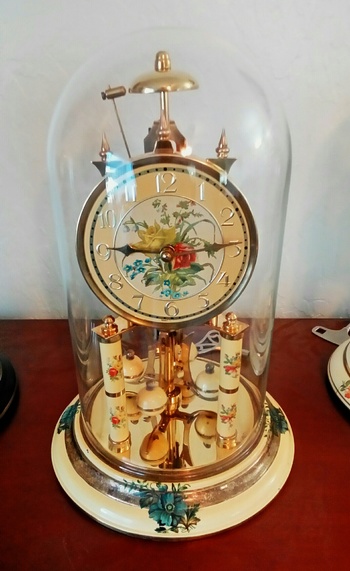 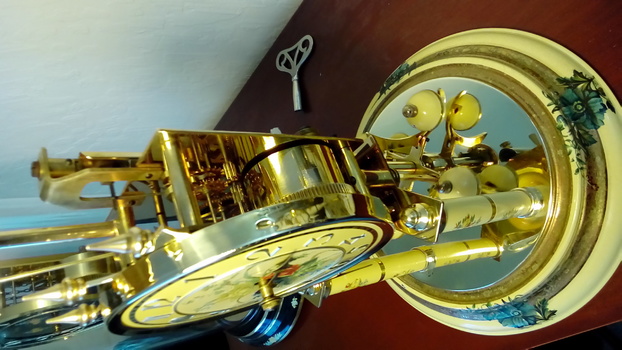 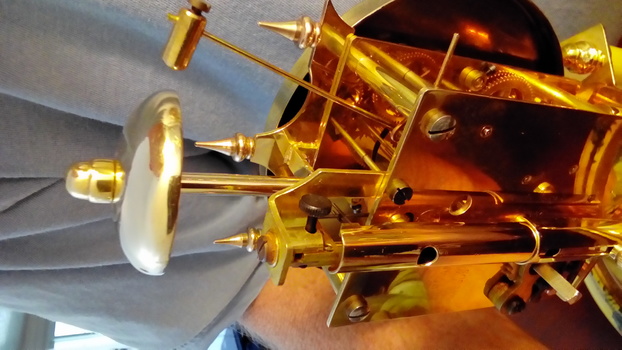 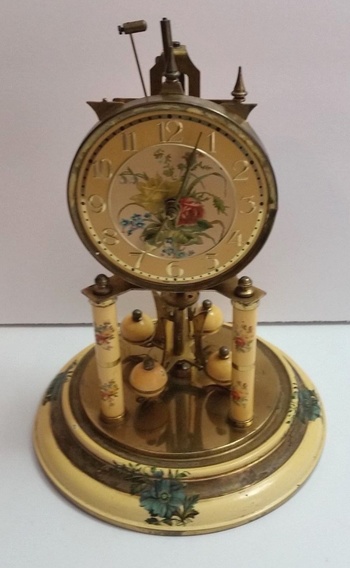 Limited production hand painted Herr Striker 400 day clock C.1952.
It was soon discontinued because the single main spring did not have enough power to operate the passing strike mechanism reliably.

I purchased this clock at an online auction site. It had fallen from it's perch many years ago and broke the glass dome and broke off the original bell (missing at time of sale.) The person I bought it from told me her mother had received it as a gift from her son who was stationed in Germany in the early 50's. She always kept it on a mantle even though it only worked for a short period of time before it had been broken.

This clock was the most challenging 400 day clock I have ever serviced. I found a bell online of the proper diameter but could not find anyone who was reproducing the correct height bell for this model. The Bell post had been broken and bent at the stud post that held the bell on. The bell top threaded nut was missing, and the top finial and post was broken and missing. Repairing the bell post was not difficult. I ground down the missing threaded bell post stud and drilled and tapped into the top of it. Then I inserted a brass screw and cut off the head to finish it off. The rest of the repairs were pretty much cosmetic and straight forward.

The real challenge was getting the clock to run again. I completely tore down the clock to clean and service it. I inspected the main spring and found it was cracked. I ordered a new main spring and suspension spring from thehorolovarcompany.com. I polished all the pivots and other mechanical parts before reassembly. I found the anchor pivot was slightly bent and straightened it out. During reassembly I lightly oiled all pivot points. I found that the striker assembly made final assembly a bit difficult, but after some patient coaxing it all came together.

Final assembly notes; Setting the clock beat properly is crucial to proper operation of this clock. The pendulum must have at least 1" of over swing in both directions to keep running. As the striking pass mechanism approaches the last 15 minutes of ramp lift, it slightly slows down the pendulums swing. This is where the correct pendulum over swing in both directions becomes critical. Everything must fit and operate perfectly, If anything in the clock mechanism is binding or sticking this clock definitely will not run! 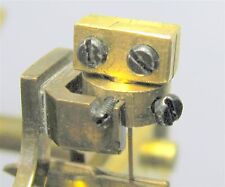 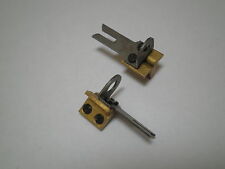