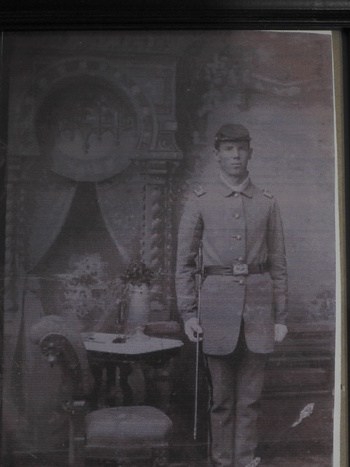 This is my great-great-grandfather, Captain W. O. Cochran who served during the Civil War. He was mustered into the Confederate Army service on May 3, 1864 in Tupelo, Miss. by Capt. Warwick Hough. He was appointed 1st Lt., Co. "C," 3rd Reg't, Mississippi vol. Cavalry, Gholson's Brigade, Forrest's Corps. When he served in the Confederacy, he was in Captain Richmond's company, McGuirk's regiment, Chalmer's Brigade and was appointed Captain prior to his capture. He was captured on July 28, 1864 near Atlanta by the U.S. 15th Army Corps. He was laying on the battlefield with a chest wound the day of his capture. (Members of my family have the bullet that was removed from his chest.) He was a member of Camp Kitt Mott, No. 23, Mississippi Division. He died at his home in Marshall County, Miss., January 3, 1901.