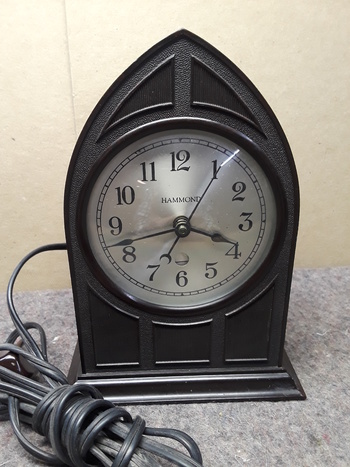 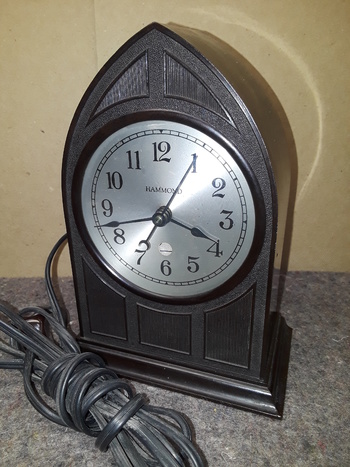 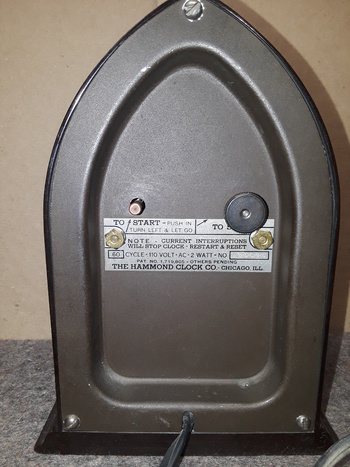 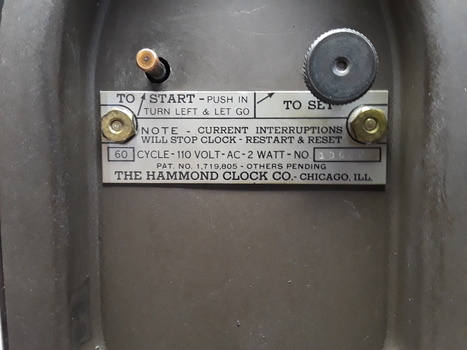 PLEASE visit this link to a very similar clock I showed yesterday, for more of its (their) backstory (plus a few helpful links including one going back to yet another of my HAMMOND clocks shown a while ago which includes even more 'history detail') so's I don't have to do so much redundant typing etc...?? ;-) :-)

This is my 2nd RAVENSWOOD clock, serial# 135605. Outwardly it is nearly identical to my other one in its brown bakelite case, but when they're side by side there are several important differences between them, suggesting this is the newer of the two. Most obviously at a glance, this model is not an alarm clock -- it just tells the time. [and YES SpiritBear, like all the others it is perfectly happy running *absolutely backwards* if one should spin its START knob the wrong way...always entertaining to have one hanging around the 'home bar' for that exact reason... <giggle>]

Another big (though maybe not obvious at a glance) difference is the inclusion of a 'telltale window' just below the center of its dial -- a small hole in the dial face revealing a glimpse of a white painted wheel with small black lines on it which is part of the escapement mechanism inside -- when the clock is running the little black lines can be seen moving thru the 'window hole' (probably corresponding to "seconds"?) to show that there has not been a power outage (which would make its motor stop completely, if power then came back on it would not restart automatically) and thus that the time displayed remains correct.

The long story shorter of all that is, back then, there was apparently somewhat of a legal battle going on between Laurens Hammond and one Henry Warren who was the inventor of the "TELECHRON" electric clock motor mechanism of abouts the same time frame in history. Looks like Henry was technically first thus the brief corporate feud. [and one way or the other Laurens went on to developing the HAMMOND ELECTRIC ORGAN using similar technology for another purpose, which ultimately made him his legacy company...] It all centered around the fact that Henry's version *would* automatically restart itself after a power outage (admittedly a much more frequent issue back then I suppose?) and Laurens' version *wouldn't*. Seemingly the whole dust-up also resulted in some general re-designing of TELECHRON clock movements of the same period to include "telltale" indicator mechanisms of their own.

The whole thing was (retrospect) maybe an entirely classic (now sorta hilarious?) example of "a problem becoming a feature" vs. "a feature becoming a problem" depending on one's point of view...? <LOL>

The more minor stuff: Its backside nameplate style has changed, now made of aluminum instead of brass, and its power cord has also probably been replaced already. Like my other RAVENSWOOD it is currently both non-functional and completely unexplored as to the exact reasons why.