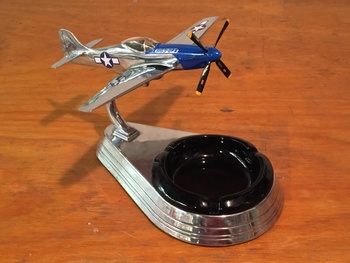 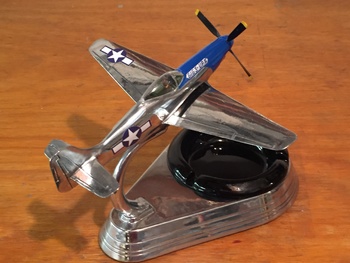 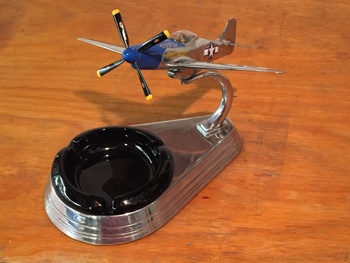 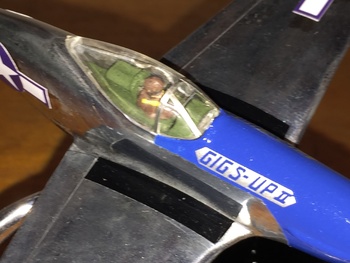 Allyn Sales, a division of K & B Motors (model airplane engines) were an established casting and finishing company in Los Angeles. They competed with Victor Pastushin Industries to produce high quality chrome airplane ashtray models. In a sudden surge of business in 1944, Allyn Sales (Aero Novelty) hit a winner with North American Aviation (NAA) and this popular P-51D Mustang ashtray model. NAA was their primary client until 1946 when full-scale airplane production and orders slowed. Allyn went on to produce this P-51 for the consumer market and then followed up with another contract with Lockheed for the P-80 Shooting Star. From 1944 until the early 1970's, Allyn produced a myriad of models with the B-1 Lancer Bomber being the last Allyn design (but produced under the Pacific Miniatures (Pac-Min) flag). Allyn also produced small lots of these Mustangs and other models as painted models so that they may get special paint markings for pilot reunions. This particular Mustang was finished in a homage' to that particular program. It had significant chrome pitting and had lost all of its ugly metal prop blades. An original canopy and cockpit insert were secured for this project and highly detailed. The model lost its chrome but the high quality metal casting was repolished. It received new scale resin propeller blades, new paint and specific details of a fighter from the famous 352nd Fighter Group based in Bodney (England). Enjoy!!