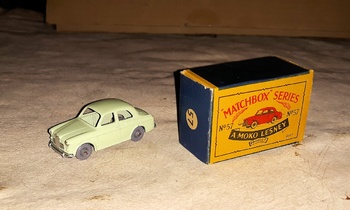 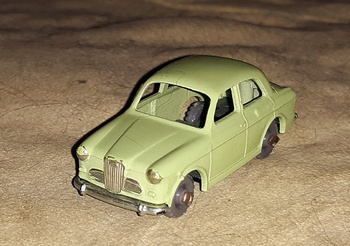 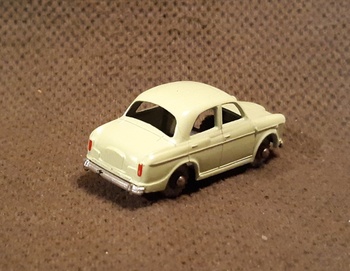 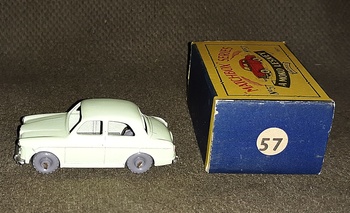 The real Wolseley 1500 was a rather small car with the engine size in its name. It had a top speed of 77 MPH. Probably went uphill slowly and not fit for the Autobahn but it had great gas mileage.
This was the first MB57 and was released in 1958. It had a short run as it was only in the catalog for 3 years. No opening parts part there are paint details such as taillights and the grill. Later models did not have different color paint on the same part. Instead the grill would be part of the base for a silver grill but this one has it painted silver. There is no glass or interior so this is fairly primitive for a Matchbox model.
Now for the exciting box section! Please remain in your seats and refrain clapping nd cheering until this section is over. This is a B style box which was used from 1954-1960. This is the B3 variation of this box. The exciting change that made it it the B3 is that the number "57" is in a white circle on the end cap. The first version had no number, then a "57" on the dark blue background which was hard to read. As these boxes were kept behind a counter with only the end flap visible having an easily readable number was important. OK everyone can stand and applaud now.