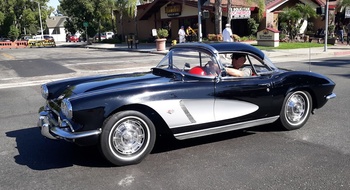 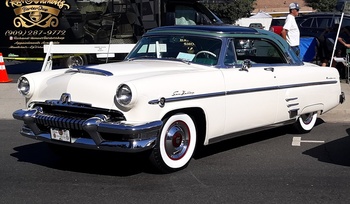 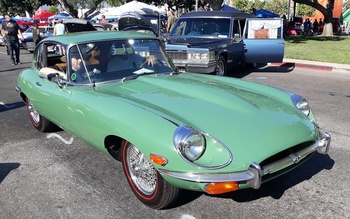 OK so only 2 are actually cruising but this is a cruise car show. Most of the cars are static during the day and cruise at night. It was about 95 and daylight cruising can be rough on the cars and occupants. Another pointy I would like to point out is the park-like setting that divides the northbound and southbound sides the road, The road being Euclid. It goes on like this for over 10 miles. It was where the trolley tracks were originally. First a mule drawn trolley and then the Pacific Electric Red Car. Now on to the cars.
First up is a Ford Ranchero. I like the red wheels and white walls on that.
Next is a Corvette. Let's see a 1961 or 62. OK I am going with 61.
Number 3 I am not sure about but it is located between photos 2 and 4.
Photo #4 a Jaguar XKE. It is the token European car not counting VWs. I think this may be one of those 12 cylinder vehicles which would explain the long front end.
Now to take photos of my Greenlight Motorhome.