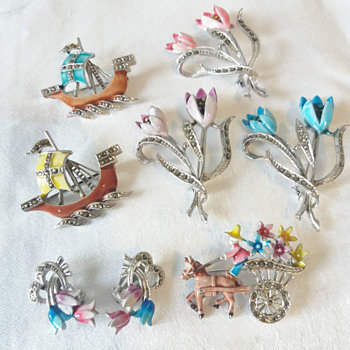 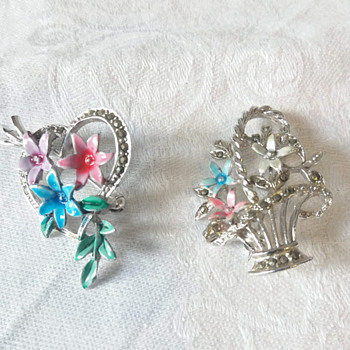 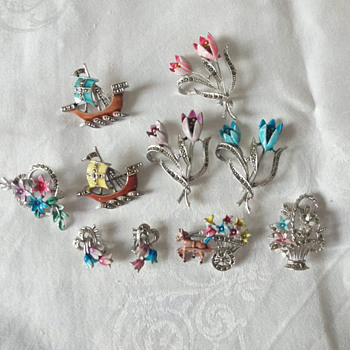 While I was researching my BJL marcasite enamel brooches, I found a very informative book in the national library, "Marcasite Jewellery – History, Designers and Manufacturers” by Patricia McMullen, 2016.

The book reproduced an advert from 1961 featuring a collection from Bloxidge Brothers Bee Brand - the brooches in the first photo above are all featured in the advert in the book. The advert was in black and white but from what I've seen, several of the brooches were produced in different colours, like the flowers in red, lilac and blue. The two in the second photo are brooches that I have that clearly belong to the same collection but are not featured in the book.

For identification purposes, it is important to note that the marcasites in Bloxidge Brothers jewellery are glued in, and all their pieces are unsigned. In contrast, the marcasites in BJL jewellery are hot set or bead set, and not glued on to the piece. (Of course, it goes without saying that unsigned pieces with glued in marcasites are not necessarily made by Bloxidge brothers, but you can rule out BJL as their manufacturer!)

Some info from the book and from what I have learned by examining my pieces:
Bloxidge brothers were formed in the 20s. Jewellery production stopped during WW2 and they produced military badges instead. After the war, they made ranges of costume jewellery including rhodium plated marcasite and enamel brooches under the trademark Bee Brand. It’s important to note that all of their jewellery was unsigned.
As was common at that time, the brooches were sent out unpackaged to the wholesalers, leaving it up to the wholesaler or retailer to provide packaging. Woolworths was one of the retailers that they supplied. They started to supply their own packaging in 1976, and closed shortly after in the late 70s.

The Bee Brand advert featured in the book features the little galleon with a single enamelled sail with a marcasite cross, the horse and cart with flowers on the back, and various floral marcasite and diamante necklaces, earrings and brooches.

Looking at the Bloxidge Brothers enamel brooches compared to BJL, the colours are simpler and the enamelling not as detailed as BJL. They tend to use more solid colours without the delicate shading present on BJL pieces. In general the standard of paintwork on BJL pieces looks a lot better than Bloxidge.

In the 1961 advert, their addresses were listed as Holliday Road, Handsworth, Birmingham (Regal Works), and their London office listed as Hatton Gardens, London EC1.

As an aside, there are internet sites that claim Bloxidge Brothers made jewellery for the Hollywood brand, but the book states that the trademark Hollywood was used by D. Akerman and Sons, who also used the trademarks Delta and Ainette.

I hope this is useful and/or interesting to some of you!