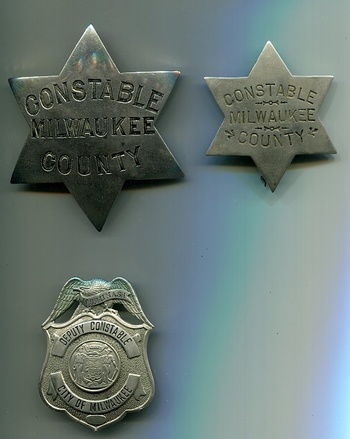 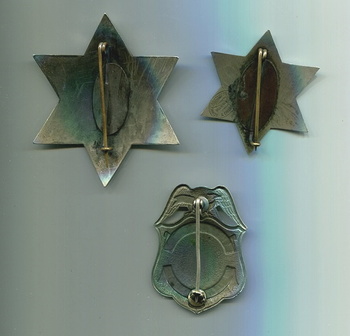 The first time I ever saw a constable badge, it was being worn by a guy who walked up to our table at an Appleton, Wisconsin coin show back in the 1980’s. It was a six pointed star type circa 1900. I asked if it was for sale and was told no because he was a real town constable. I then asked how he became a constable and he told me that the position was on the last election ballot. Since no one was running for that office he wrote in his name and won! When I asked what he had to do as a constable I was told not that much, mostly late night barking dog complaints and such. A few years later I found a large (71 mm wide by 84 mm tall) nickel finished Milwaukee County Constable six point star badge at an antique show. The badge has ornamented lettering but is without any maker’s marks. Milwaukee County abolished the County Constable position in 1955 when the sheriff’s department assumed the Constable’s duties so I assume this version was used until 1955. Recently I found another Milwaukee County Constable badge. This one is was marked “Schwaab Stamp & Seal Milwaukee & Chicago” which would date the manufacture of this badge between 1888-1890. This version is 52 mm wide and about 61 mm tall, has a nickel finish and some ornamentation highlighting the obverse inscription.
Another recent acquisition taught me that Milwaukee also had a City Constable. That shouldn’t have surprised me, but in over forty years of collecting Milwaukee badges I can not remember ever having seeing that title on a Milwaukee city badge before. In this case we have an eagle top Deputy Constable badge from the City of Milwaukee named to “M.S. Minash”. Based on the dated Special Deputy Badges of Milwaukee County this badge would date from the mid 1920’s. Since this is a Deputy Constable badge we now know for certain that there must be a City Constable badge out there too.